Michael Painter, the woodcarver chosen to make a copy of the Dog and Pot sign which was once a Blackfriars Road landmark, has visited Southwark to see the original trade sign. 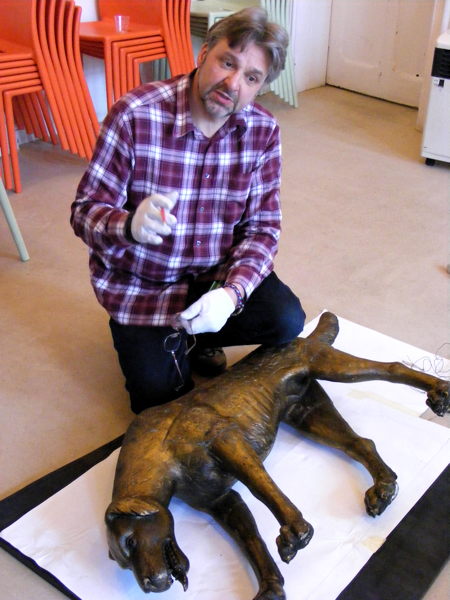 The Dog and Pot sign was displayed above a shop on the southern corner of Union Street and Blackfriars Road for much of the 19th century until some time before the Second World War.

A replica is to be installed on the same spot this year as part of the re-landscaping of the garden outside the modern Rowland Hill House and to coincide with the Charles Dickens bicentenary celebrations.

The idea of bringing the Dog and Pot back to Blackfriars Road was conceived by artist Jason Brooks who has worked with a steering group including local historian Stephen Humphrey and Cathedrals ward councillor David Noakes to secure section 106 funding from local developments to make the project happen.

The sign, which is mentioned in writings by Dickens, has been taken down from its usual high-level display in Southwark's Cuming Museum as curators prepare to include the piece in the Fact into Fiction: Charles Dickens – A Southwark Childhood exhibition which opens in May.

Warwickshire-based Mike Painter took advantage of the opportunity to get a closer look at the original sign at the Walworth Road museum.

"The biggest problem is that this is the only access I get," commented Mike who said that he was gleaning every piece of information available.

With his assistant Emma Cook he spent several hours taking photographs from every possible angle and making careful measurements.

During 1997 Mike supervised a team of carvers working on restoration at Windsor Castle following the fire damage. His work can be seen in St Paul's Cathedral and the Palace of Westminster.

His portraits include William Morris and Blessed John Henry Newman.

He is currently working on a copy of a 15th-century Italian chair for the Victoria & Albert Museum and a figure of Christ for a Leicester school.

The new dog will be made of seasoned elm which is difficult to source but remains the best material for a long life.

The age of the original dog has long been a mystery. It is usually dated as late 18th century but Mr Painter's initial view is that the quality and detail of workmanship could point to a date of around 1720. This would support the suggestion that the dog may have first adorned a City inn.

"The community is looking forward to seeing it," said Clare, a local resident who was present on behalf of neighbours to meet the woodcarver.

This year Walworth-based arts and mental health charity CoolTan Arts will be working with a group of volunteers to create The Dickens News, a newspaper inspired by Dickens' first novel The Pickwick Papers.

Produced in partnership with the Southwark News, the publication will explore Southwark's heritage through the prism of Charles Dickens and his early life.

The Dickens News will be published in the autumn along with exhibitions of original work at CoolTan Arts, the Cuming Museum, Southwark Cathedral and the Charles Dickens Museum.

"We are really pleased to be supporting a Walworth arts organisation in their Dickens 2012 project, especially as it will engage so many local people," said Catherine Hamilton, manager of the Cuming Museum.

CoolTan's workshops begin in May.