A replica of a Victorian shop sign that formed one of the landmarks on the young Charles Dickens' regular walk through Southwark has been unveiled by the writer's great-great-grandson. 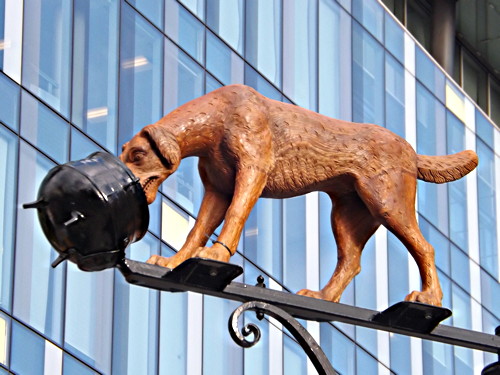 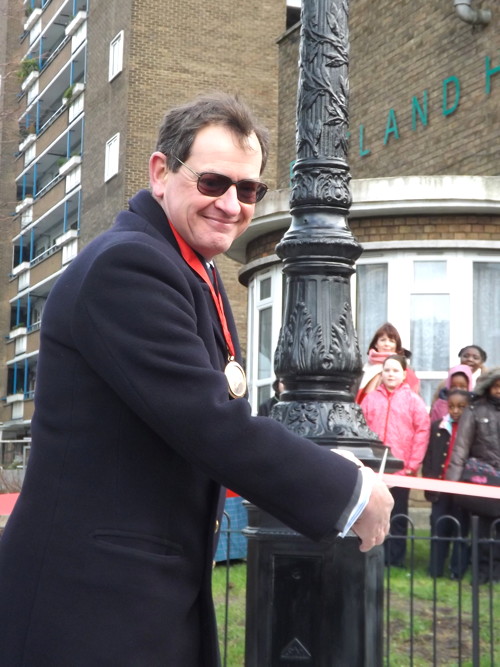 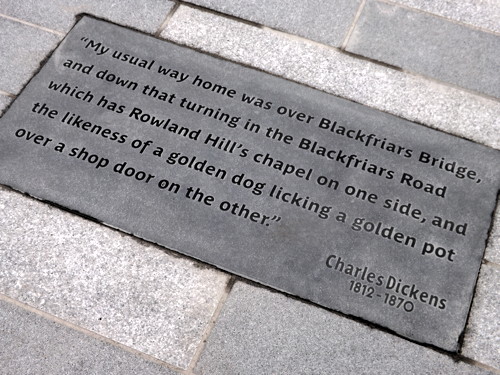 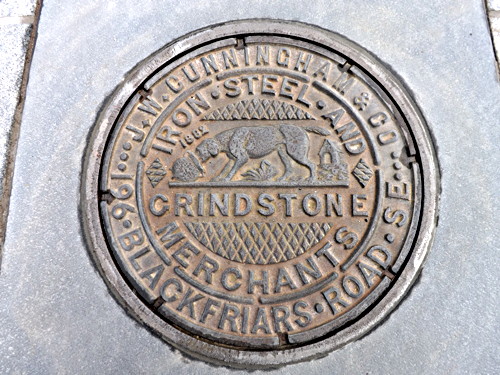 A reproduction coalhole cover depicting the Dog and Pot 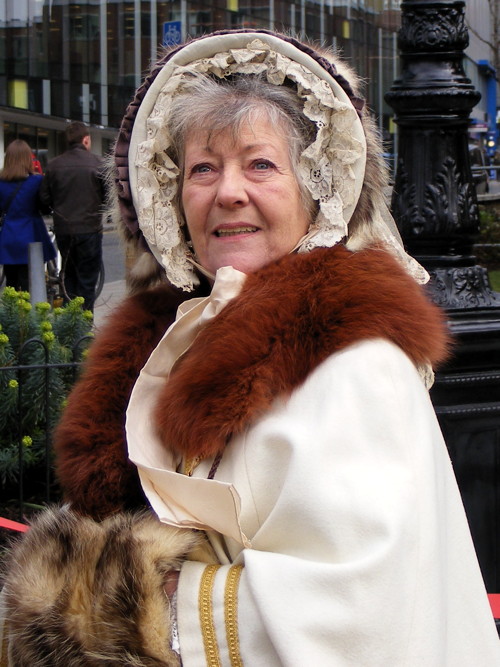 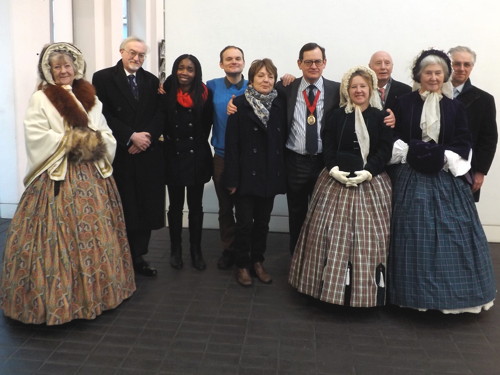 Members of the Dog and Pot steering group with Mark Dickens 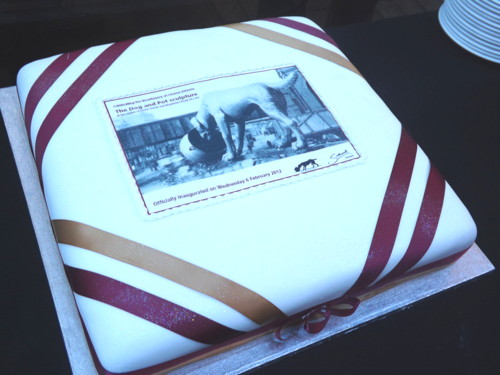 The unveiling of the new sign – based on one displayed at Southwark Council's Cuming Museum in Walworth – was held on the eve of Charles Dickens' 201st birthday as the culmination of a year of bicentenary events.

"The borough of Southwark has an amazing heritage, including many surviving buildings and artefacts associated with Charles Dickens," Mark Dickens told the assembled crowd at the junction of Blackfriars Road and Union Street on Wednesday afternoon.

"The one that we are celebrating today – the Dog and Pot sign – is particularly significant.

"It always reminded him of a major turning point in his life when as a young boy, in the depths of despair, instead of turning inwards on himself or descending into crime, he hurled all his energy into a burning ambition to succeed – if he ever got the chance.

"At that time he was only 12 years old [and] his life seemed to be falling apart before it had even begun.

"His father had been sent to prison for being unable to pay his debts, and the young Charles was taken out of school and sent to work in a blacking factory to earn money to support the family."

Mr Dickens explained that his ancestor lived at the time in lodgings in Lant Street, and walked down Blackfriars Road on his daily journey from the factory across the river.

"He swore to himself that if he ever had the chance he would go back to school and make something of his life – which of course he did.

"From this humble start, in this very spot, my great-great-grandfather rose up to become, as Prince Charles wrote: 'One of the greatest writers of the English language who used his creative genius to campaign passionately for social justice.'

"This fabulous Dog and Pot sign is therefore an important symbol for Charles Dickens' life and I would like to take this opportunity to thank Southwark Council, the steering group and Jason [Brooks] for this amazing sculpture."

In his speech Cathedrals ward councillor David Noakes, who has served on the project's steering group, explained that artist Jason Brooks had first contacted him in 2008 to discuss the idea of bringing the Dog and Pot back to Blackfriars Road.

"Just over four and a half years later, we finally stand here today in front of the realisation of his vision for bringing back a piece of history to this area," said Cllr Noakes.

Cllr Noakes also noted the sacrifices that had been made to allow the project to go ahead, including the controversial relocation of a much-loved monkey puzzle tree.

The new sign is surrounded by a paved area into which is set a plaque which bears a quote from an essay by Charles Dickens about his early life: "My usual way home was over Blackfriars Bridge and down that turning in the Blackfriars Road which has Rowland Hill's chapel on one side, and the likeness of a golden dog licking a golden pot over a shop door on the other."

"The sculpture of the dog is made from elm wood and has been carved by Mike Painter. The new dog and an original iron pot sit on a specially commissioned bracket created by Owen Cunningham which is mounted on a 4.5-metre column.

At its base is a replica of a Victorian coalhole cover which also carries the image of the Dog and Pot.

At the unveiling ceremony pupils from Charles Dickens Primary School sang songs including How much is that doggie in the window? Members of the Canterbury branch of the Dickens Fellowship attended in Victorian costume.

Afterwards a celebratory Dog and Pot cake was cut by Maxine Walker of the Nelson Square Gardens Community Association.

"It is wonderful to be able to celebrate the bicentenary of Charles Dickens with a new sculpture for Southwark," said Cllr Veronica Ward, cabinet member for culture, leisure, sport, the Olympic legacy and volunteering.

"The celebrated author has a long and deep association with Southwark, both personal and literary, particularly within Borough, so it is most fitting to have this new art piece there."

The design process was overseen and initiated by artist Jason Brooks who has worked with Southwark Council's frameworks and implementation team and a steering group of local representatives to bring the project to completion.

• A commemorative first day cover produced to mark the inauguration of the sculpture has been published by Tilbury Editions and is available on eBay.

• The Dog and Pot is one of the locations featured in the Dickens in Southwark smartphone app which is available for iPhone and Android.