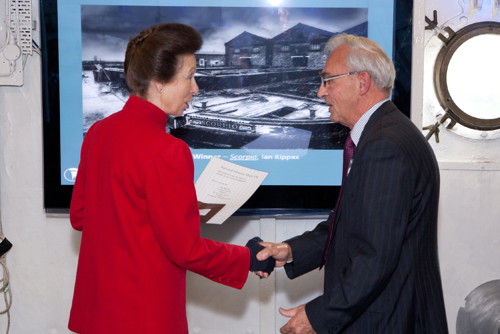 Ian Kippax receives his award from the Princess Royal

The winners of National Historic Ships UK's 2012 photography competition, Marsh Volunteer Awards and Flagship of the Year were revealed at the ceremony held on board the World War II ship moored in the Pool of London.

The overall winner of the 2012 photography competition was Ian Kippax from Ely in Cambridgeshire after his image, Scorpio, was chosen from over 450 entries to scoop the Ł1,000 prize to be spent directly on one of the vessels on the National Register of Historic Vessels of his choice.

Described by the expert panel of judges as a 'powerful, almost haunting' image, Scorpio was selected as the entry which showed most imagination, creativity and most unusual perspective in capturing the spirit of the UK's maritime heritage. A copy of Scorpio was also presented to the princess as a commemorative gift.

New for 2012, NHS-UK also launched the search for the Young Photographer of the Year, encouraging primary and secondary school children to showcase their photography skills. 15 year old Hannah Davies from Bishopston Comprehensive School in Swansea was the winner of this coveted award with her entry, Mumbles Lifeboat Station, and received a digital camera for her school as well as a visit to a historic vessel for her and her class.

Now in its second year, the Marsh Volunteer Awards recognise outstanding volunteers in the conservation or operation of historic vessels in the UK. This year's scheme also saw the introduction of the Young Volunteer of the Year award to acknowledge the role of young people under the age of 25 in historic vessel conservation.

Lisa and Derek Chafer were named as the 2012 Marsh Volunteer Award winners for their outstanding dedication to the Humber Sloop Amy Howson and received the top prize of Ł700. As members of the Humber Keel and Sloop Preservation Society, Lisa and Derek have made an all-round contribution to give the society's preservation work a stable financial position for 2013.

With the judging panel's decision so close a second prize was also awarded to Simon Sawers from the SS Explorer Preservation Society in Aberdeen. As a volunteer for the society for nearly 15 years, Simon is now Society Chairman, actively leading the work to preserve and save this historic ship and as a result took the Ł300 second prize.

Sisters Hannah and Bethany Pihama collected the award for the 2012 Young Volunteer of the Year for the exceptional commitment they have shown in the restoration of the historic sailing barge Cambria in Kent. Dedicating their weekends to help paint and finish the hull of the historic ship they scooped the Ł500 winning prize.

Also honoured at the ceremony were the owners of the Thames spritsail barge Edith May based in Lower Halstow, Kent, who were awarded the 2012 Flagship of the Year and took the Ł1,000 winning grant to go towards the cost of keeping the vessel in operational condition and open for public viewing.

First launched in 1906 for coastal trade the 86 foot coasting barge was selected as the winner due to its extensive public programme throughout 2012 including festivals, barge matches, public cruises and a place in the Queen's Diamond Jubilee River Pageant.

"We are honoured that HRH the Princess Royal was able to join us in celebration of the UK's inspirational maritime heritage in a year when our history was on display to the world with the Queen's Diamond Jubilee Pageant," said Martyn Heighton, director of National Historic Ships UK.

"The ceremony is a great opportunity to share and reward the remarkable achievements of those working so hard in the conservation of the UK's historic vessels, without whom many of our most significant vessels would no longer survive for members of the public to enjoy.

"This year we received a host of exceptional entries for each of the awards categories, which made the judging process very difficult, but the winning entries shone through and it's with great pleasure that we can recognise their valuable contributions, hard work and dedication."