Leading local Labour politicians joined firefighters from Southwark and other threatened fire stations outside City Hall on Monday morning to protest against the Mayor's planned cuts to emergency services. 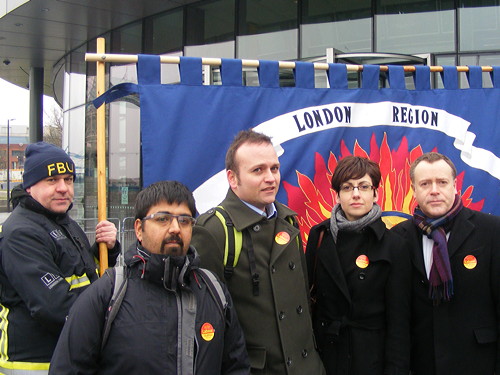 The demonstration at City Hall was timed to coincide with the London Assembly's final deliberations on the Mayor's proposed budget for 2013/14.

Although a majority of assembly members voted against Boris Johnson's budget proposals, the two-thirds majority required to block or amend the budget was not reached so the Mayor's budget was passed unamended.

The demo followed a London-wide leafleting campaign by Labour activists at tube and rail stations during Monday morning's rush hour.

Southwark's Labour council leader Cllr Peter John told the SE1 website that the Mayor should rethink plans to close 12 fire stations across the capital, including the Southwark station in Southwark Bridge Road.

"Southwark Fire Station is the closest to all the new development in the north of the borough," he said.

"It seems to me to be absolutely crazy at a time when buildings like the Shard are opening, when More London is as active as it is and with [so many] new tall buildings, that we're getting rid of the closest fire service."

The London Fire and Emergency Planning Authority's urgency committee will this week decide how to respond to the Mayor's threat to launch judicial review proceedings of its recent decision to defy City Hall over the closure proposals.

Labour has also criticised the Mayor's plans to reform policing in London, cutting the number of front desks and reshaping safer neighbourhoods teams.

Cllr John said: "The big concern is the question of safer neighbourhoods teams which have provided a lot of reassurance for people. The fact that it looks as if we will lose those in their current form is a cause for real concern."

Earlier this month Southwark's Labour cabinet agreed to set aside Ł750,000 saved by the purchase of the council's Tooley Street headquarters to help meet the cost of capital works to create new police contact points to replace the front counters due to close when East Dulwich and Rotherhithe police stations are shut.

"Shutting up cop shops to public access and destroying the local policing model risks setting policing back more than a decade and separating the police from their communities."

Welcoming the approval of his budget proposals, Boris Johnson said: "It is vital that we boost economic growth and create the jobs that we need to help lift this city and country out of our current economic difficulties.

"Businesses will only want to invest here if they see us offering the best quality of life for a major world city. That means building more houses, making London safer and continuing with crucial infrastructure projects like the upgrade of the Tube and Crossrail.

"Delivering value for money, whilst making London safer and ensuring that we have emergency services that we can continue to be proud of is one of my key priorities."