Building works at an Elephant & Castle tower block which have been suspended since a resident was hospitalised after a gas leak last November will resume early next month, according to Southwark Council. 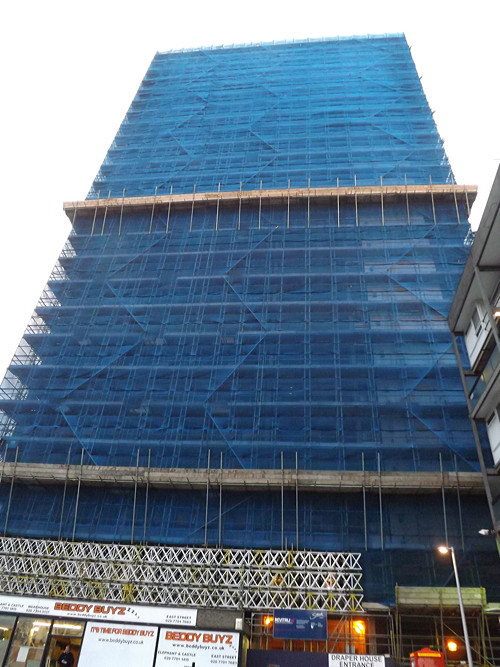 Works at Draper House – next to the Strata SE1 tower – have been at a standstill since last November, with residents living surrounded by scaffolding and netting.

The refurbishment project was halted after a gas leak which left one resident of the council-owned tower block in hospital.

Residents of the tower were asked whether they supported the use of back-up contractor A&E Elkins or would prefer the council to re-tender the Ł5.1 million project.

"Our priority has always been to resume work at Draper House as swiftly as possible and to a standard that meets the needs of our residents," said Cllr Ian Wingfield, deputy leader of Southwark Council and cabinet member for housing.

"The decision to use a back-up contractor was driven by our residents and is a welcome step towards achieving this goal, and to delivering our ultimate plan of providing warm, safe and dry homes across Southwark."

The council says that more than 90 per cent of Draper House residents who responded to the consultation process supported the decision to choose A&E Elkins and that the company should be in a position to start work just after the Easter holiday weekend.

Opposition councillors are continuing to ask for clarification as to the cost to the council of terminating the Breyer contract.

"Residents have gone through absolute hell in the past few months, and many have been left with boarded up windows and walls whilst the council works out what it's doing next," said Newington ward councillor Cathy Bowman.

"After all the problems with this project, it's absurd for the council to try to hide details of how the contract was ended and how much it has cost us. This is taxpayer money, and it is clearly in the public interest that the council comes clean on Draper House."