Police seized a large quantity of drugs and arrested three people at a flat in Elephant & Castle after receiving a tip-off about a strong smell of cannabis. 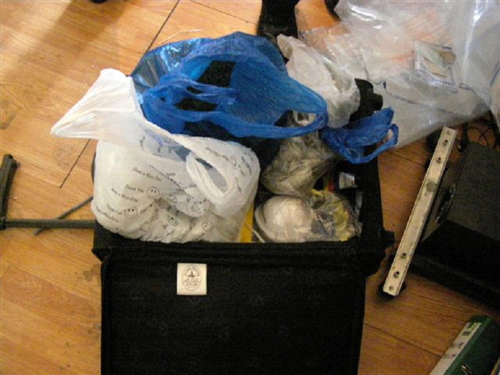 Officers from the Newington Safer Neighbourhoods Team carried out the raid at Draper House on Tuesday after PC Cathy Thomas had obtained a search warrant under the Misuse of Drugs Act.

The officers found what they describe as "large quantities of herbal cannabis" hidden in a suitcase and bags throughout the flat, along with various other items of drugs paraphernalia involved in the production of cannabis.

Three men – aged 19, 20 and 32 – were arrested at the scene on suspicion of possession of cannabis with intent to supply and have since been bailed pending further enquiries.

"Drugs cause a great deal of harm to our communities and we are determined to target those that are involved in the production and supply of drugs in Southwark," said Sgt Peter Smith.

"If you suspect that people are producing or dealing drugs in your local area, then get in touch with your local police team and we will take positive action against those involved, like we have in this case."

Anyone with information about drugs in their area can contact their local Safer Neighbourhoods Team by calling 101 or contact Crimestoppers anonymously on 0800 555 111.