Residents of an Elephant & Castle tower block who have lived behind scaffolding and netting for two years last month held a protest to highlight their frustration. 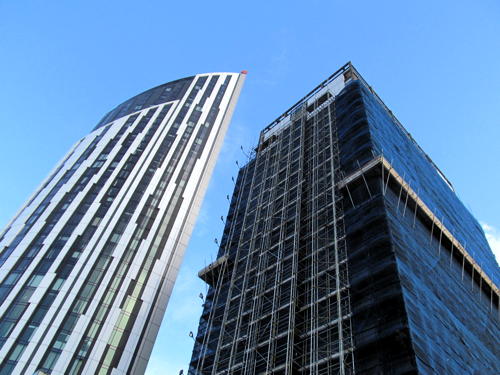 "Draper Estate residents have put up with an incompetently delivered contract for far too long," said Simon Hughes MP who joined residents for their protest last month.

"A failed contractor may not have been predictable, but the time it's taken to get the new contractor up and running – and the fact that some of the work now being done still isn't up to standard – is just unacceptable.

"Certainly serious compensation to all the people who have lost the use of the homes and their balconies – and lost the view through their windows – must be offered by the council.

"Everybody's plea is that the work is finished urgently to decent standards that will last and that nobody has to pay over the odds for what has been a saga of one failure after another."

Southwark Council initiated a Ł5.1 million package of internal and external works at Draper House but it terminated its contract with Breyer Group plc a year ago after a catalogue of problems.

The handling of the contract was examined last year by a cross-party scrutiny committee which made a series of recommendations.

Cllr Ian Wingfield, cabinet member for housing, said: "We fully understand the frustration and distress the issues at Draper House have caused residents and we apologise unreservedly.

The council has pre-empted the concerns of these residents by commissioning an independent investigation into a number of matters concerning Draper House, we will await the outcome of this rather than speculate beforehand on what the recommendations might be.

"Individual cases concerning the works are being dealt with separately through a legal process. After this has concluded, we hope to be in a position to take a decision on the next steps.

"In the meantime the essential, extensive works on both the interior and exterior of the building will continue until completion. We hope that we will be able to give a date for completion for all works in the very near future."