40 veterans and their families joined prime minister David Cameron at a reception on board HMS Belfast on Tuesday following the Arctic Star medal presentation at Downing Street. 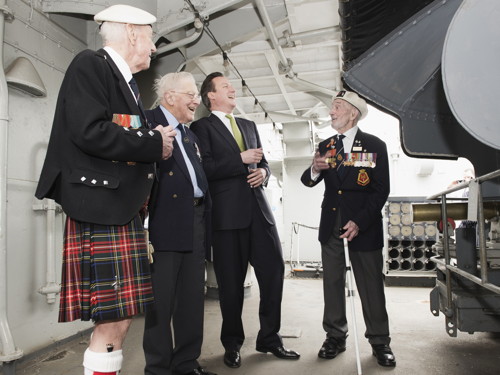 Speaking at Number 10, the PM told the veterans: "I am only sorry that it has taken 70 years to get to here and to say thank you for what you did."

"You were involved in the most important struggle of the last 100 years when you were supplying one of our allies in the battle to defeat Hitler and to defeat fascism in Europe.

"You are a group of heroes, thank you."

"It is fitting that today's reception for the Arctic Star medal recipients is held on HMS Belfast, taking into account her history and role in the Arctic convoys.

"It is fantastic news that those who embarked on the most treacherous seafaring journeys of the Second World War have, and will continue to receive, recognition for their contribution which they very much deserve."

Described by Winston Churchill as 'the worst journey in the world', the Arctic convoys of the Second World War saw HMS Belfast and ships of both the Merchant and Royal Navies make perilous journeys in sub-zero temperatures to ensure vital supplies reached Russian shores.

Four million tons of supplies, including over 5,000 tanks and 7,000 aircraft for use by Soviet forces fighting against the Nazi armies on the Eastern Front, were carried to North Russia through temperatures as low as minus 30 degrees celsius.

The PM's visit to HMS Belfast comes just days after the ship celebrated its 75th anniversary.