Southwark Council has unanimously passed a motion thanking the emergency services for their efforts to tackle the fire that destroyed much of the Walworth town hall building earlier this week. 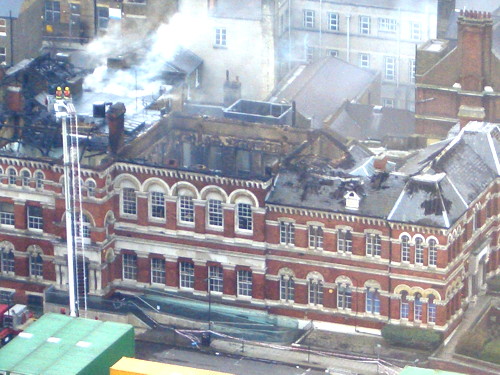 At Wednesday's council assembly the council leader, Peter John, began by providing an update on the situation following Monday's fire which swept through the old town hall building that housed the Cuming Museum and Walworth One Stop Shop.

"Approximately one per cent of the entire collection of the Cuming Museum was on display in the three galleries," said Cllr John, who acknowledged that the items on show were "probably the best one per cent".

"Thanks to the actions of the fire brigade on Monday, something like 500 items were rescued from gallery 1," he said.

Gallery 1 contained items from the Cuming collection whilst gallery 2 was an exhibition of items related to the history of the borough, including Roman items and artefacts linked to Charles Dickens. Gallery 3 was used for temporary exhibitions.

Cllr John continued: "I know that the museum staff have been devastated by that fire and really do feel that they were the custodians of the collection of the museum for this generation of Southwark's residents."

He added: "I would like to pay tribute to our museum staff who are currently cataloguing the items which have been rescued for their absolute dedication to that work. They worked throughout the night on Monday to continue the rescue operation.

"The museum carried out a degree of outreach work with schoolchildren and we are currently looking for premises in the area where they can continue that work as soon as possible."

Cllr John said that the council also planned to open a new One Stop Shop for face-to-face enquiries about council services but warned that the process of finding a location and fitting it out could take "weeks or even months". In the meantime Walworth staff have been redeployed to Bermondsey and Peckham.

The leader reported that the damage to Newington Library, which is adjacent to the old town hall, appears to be limited, although the book stock will need to be cleaned.

"But for the work of the fire brigade on Monday we could have seen the loss of Newington Library as well. It was a very difficult fire to deal with because it was within the roof structure of an almost impenetrable roof," he said.

"The fire brigade had to break through the section closest to Newington Library in order to prevent the spread of the fire.

"We could have been looking at a fire which might have lost not just one but two or more important civic buildings."

The council is awaiting the results of a structural survey of the library building: "Clearly it is a building that has been sitting next to an incredibly intense fire which raged for the best part of 24 hours.

"Although the damage may appear to be cosmetic, it could be weeks if not months ... until the library can be reopened."

Turning to the future, Cllr John said: "I'm sure all of us want to see this building back in civic use as soon as possible."

He reminded councillors that it had always been intended that the town hall should be "a link between old and new Walworth" in the regeneration of Elephant & Castle.

"This gives an opportunity to bring forward the discussion about how this building may play that role in civic life in the borough," he said.

"I will be very interested in the future to see what architects come forward with in order that we have a museum and we have a usable civic space. Maybe even we might have meetings of council assembly in that building; who knows?"

Opposition leader Cllr Anood Al-Samerai said she had always been struck by how much people in Southwark cared about local history, despite the pressing challenges of housing, employment and education.

"Local history is what binds our community together; it's something that people feel incredibly passionate about and that's what makes the events this week even more tragic," she said.

Cllr Al-Samerai agreed that the town hall building could be an important anchor during the regeneration of Elephant & Castle: "When you're seeing lots of development in an area, it's really important to hold on to the things that ground you and where you have memories and experiences."

"To lose those lovely buildings and what is a fantastic collection of irreplacable, priceless objects from the Cuming Museum is really gutting for those of us who care about Walworth," she said.

"We are not so blessed with lovely interesting historic buildings that we can afford to lose those."

Cllr Bowman recalled a behind-the-scenes visit to the museum she had enjoyed when she was part of the then Lib Dem executive.

"I had no idea what an amazing ethnographic collection it has," she said.

"In the basement at the time were thousands of artefacts that Captain Cook had brought back from his trips to Polynesia in the 18th century.

"These are things of vast importance, not just to people in Southwark but to Britain and the world.

"History is important. We learn about ourselves; we learn our identity, we formulate thoughts and ideas by looking at how people lived in the past.

"In a mixed, cosmopolitan borough like ours I really hope that we manage to salvage as many parts of that collection as possible."

She concluded: "I hope that the council will be able to rebuild behind the existing facade if that's salvagable as I think that would do something to boost the morale of people in the borough."

• The Walworth Society has called a public meeting at 7pm on Thursday 4 April to discuss the impact of the fire and possible ways forward. Cllr Peter John and the borough's chief executive Eleanor Kelly will be at the meeting to give an update and take questions. The meeting will be held at St Peter's Church on Liverpool Grove SE17.