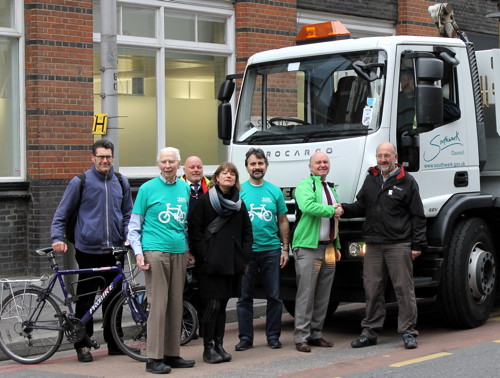 The pledge says: "We'll work to improve the safety of every Londoner by only signing new contracts with the safest haulage companies, which conform to the London Cycling Campaign's Safer Lorries conditions.

"We also pledge to ensure our council-operated services meet the same standards."

Cllr Barrie Hargrove, cabinet member for environment, transport and recycling, signed the pledge last week with Charlie Lloyd of the London Cycling Campaign and representatives of the local Southwark Cyclists group outside the council's headquarters on Tooley Street.

"As a cyclist myself, I am very pleased to give the council's full commitment to Southwark Cyclists that we will work as a council and with our contractors to aim for all our lorries and those of our contractors to meet the highest safety standards," said Cllr Barrie Hargrove.

"Southwark Council aims to be London's friendliest borough for cycling and I am charged with delivering the council's commitments on cycling and safety."

Andy Cawdell, coordinator of Southwark Cyclists, said: "This pledge will make it safer for all of us to use the roads, both in Southwark and beyond. We hope other boroughs will follow Southwark's lead."