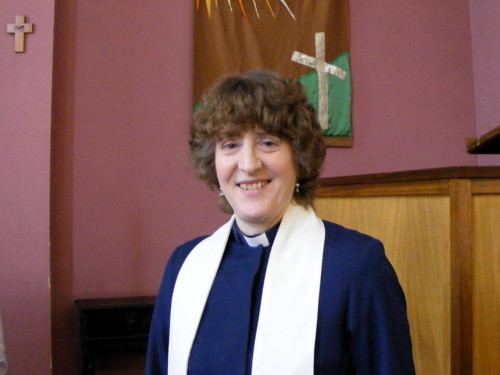 Rosemary Fletcher in church after her last service on Sunday

The church in Lambeth Road was full on Sunday morning when the congregation was joined by Rosemary's friends from Swindon, Reading and Sri Lanka as well as representatives of the other North Lambeth parish churches, Churches Together in North Lambeth, Southwark Cathedral and Westminster Central Hall. Steve Chalke from the nearby Oasis Church Waterloo was also present.

The final sermon by the departing minister dwelt on the gospel passage about St Thomas touching Christ's wounds which she said was being read that morning in every Anglican, Methodist and Roman Catholic Church.

"It is our scars and our wounds which identify us to those who know us best," she said.

It was, she added, the third time she had preached on the theme at the Second Sunday of Easter service at the Lambeth Mission. Rosemary Fletcher and her husband James came to Lambeth in September 2010 having served in Sri Lanka.

Referring after the service to her short stay of just two and half years as a member of the North Lambeth parish team and superintendent of the Methodist North Lambeth Circuit, Rosemary said: "I had no idea that we would be leaving so soon. Those who know me know that I don't like giving up on things that I started.

"The decision to leave was not made lightly but prayerfully and with full support (of team and circuit)."

After a summer sabbatical, Rosemary is to be superintendent of the St Albans and Welwyn Garden City Methodist Circuit. She will be installed in September as leader of twelve Hertfordshire churches including three local ecumenical partnerships similar to the Lambeth Mission & St Mary's arrangement.

"I really do believe that the LEP (local ecumenical partnership) is thoroughly worthwhile and needs to be cherished," stressed Rosemary who said that she had always worked in ecumenical contexts.

She confessed that one of her regrets in leaving the Southwark Diocese was that she had not played in the cricket team. She said that with her college cricket colours and new rules allowing women players she would have been able to join the rector in the winning team.