Cuts to the public opening hours of Southwark and Kennington police stations come into effect on Monday. 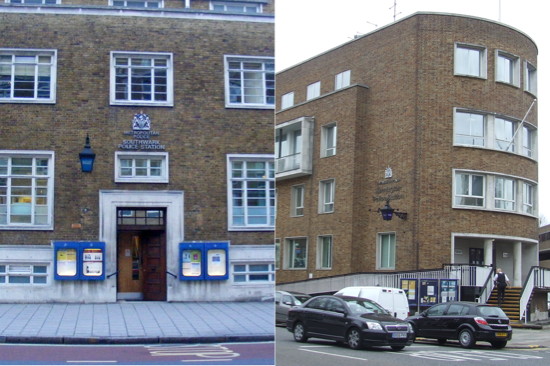 As part of the introduction of the Metropolitan Police's new 'local policing model', the front counter at Southwark will now only be open on weekdays between 10am and 6pm. The only police station in the borough of Southwark offering 24-hour public access is Walworth.

Kennington's front counter hours have also been slashed. The station will be open to the public on Mondays, Tuesdays, Wednesdays, Fridays and Saturdays between 9am and 5pm, with service offered between 12 noon and 8pm on Thursdays. Lambeth's 24-hour police front counter is in Brixton.

The Met says that instead of visiting a front counter to talk to a police officer, the public will be able to request a visit from a local officer within 48 hours by calling 101.

The front counter changes coincide with a radical shake-up of safer neighbourhoods teams (SNTs), with wards grouped together in clusters led by an inspector.

SNTs will also carry out more investigations into low-level crime rather than passing cases on to other departments.

Assistant Commissioner Simon Byrne said: "We've listened to the public and understand people just want to know police are close by. So we are changing the way we do things to make neighbourhood policing our priority.

"We will now have around 200 places for the public to access police, in more convenient locations and at differing times.

"We are telling Londoners exactly where their police will be and when, making it clearer what the best way to access police is depending on what their need is.

"Making neighbourhood policing our priority demonstrates our commitment to Londoners and will deliver the service they deserve."

The Deputy Mayor for Policing Stephen Greenhalgh said: "After the most extensive public consultation ever carried out into policing in London, we have listened to what people want in putting 'bobbies' before buildings. Moving 2,600 extra police officers into neighbourhoods provides a golden opportunity for the Met to reconnect with Londoners."