"No evidence" that Elephant regeneration will work, says academic

There is "no evidence" that the regeneration of Elephant & Castle will have a social and economic "trickle-down" effect, a London Assembly committee heard this week. 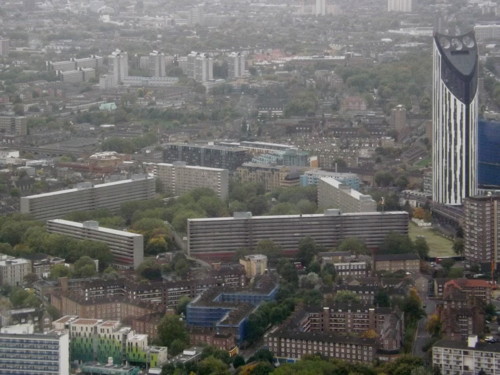 According to Professor Loretta Lees, most of the homes in the Strata tower are owned by by-to-let investors

The claim came from Loretta Lees, professor of human geography at King's College London, who was giving evidence to the London Assembly's new constituted regeneration committee.

"If you look back in history [it] was the Piccadilly of South London," he said.

"It was a great place, a vibrant place. The Luftwaffe did a bit of damage to it and then slum clearance wiped out whatever was left.

"We got a whole series of 1950s and 60s council estates and office blocks and absolutely no community – nothing – out of it. We destroyed it.

"Today perhaps we are returning to where we were before the last war. The human bit has been missed. We didn't create jobs, we didn't create opportunities.

"We just created rows and rows of housing and jobs that were largely inaccessible to the people there."

"Our argument is that the kind of urban regeneration programmes that are going on on the Heygate and Aylesbury Estates are very similar to the kind of slum clearances that were happening in the 1950s and 1960s," she said.

She continued: "There is no evidence base at the moment that these kinds of regeneration programmes have the trickle-down effect – both economically and socially – that policymakers are claiming. This actually is the big gap: there is no evidence.

Citing the development of Canary Wharf and the Isle of Dogs, she said: "You just need to go over to Tower Hamlets: two thirds of the people are living in poverty and the rest of the population is earning an average salary of over Ł100,000 a year.

"There's extreme social polarisation. There has been no trickle-down."

On Elephant & Castle, Professor Lees said: "There are no strategic, detailed plans on how you can create growth just by redeveloping property on high-value land.

"Plus, many of the people who are already there do have a community. They are very pleased about the community they live in. They don't want their housing demolished.

"I think people have not bothered to actually look at the kind of people who live in London's council housing.

"Nobody's trying to drive anybody out of the Elephant & Castle. What we are trying to do is make it more of a place.

"[We have] great opportunities for a lot more housing than we have at the moment."

Labour London Assembly member Nicky Gavron welcomed the prospect of new homes at the Elephant & Castle but noted the low proportion of social housing in the new developments.

"The community that Professor Lees was talking about has been displaced during the regeneration process," she said.

Sir Edward insisted that the regenerated Elephant & Castle will have a wide social mix of residents: "It's not just for the wealthy, an area like Elephant & Castle, because a lot of the properties you will get on the market will be pretty mid-range.

"It is probably one of the few locations near central London where people on more average incomes are likely to be able to buy and to live. So I think it's a good mix – but it is about a mix."