Two off duty firefighters - including one based in Old Kent Road - helped save the life of a football fan who collapsed after a Charlton game at The Valley on Saturday. 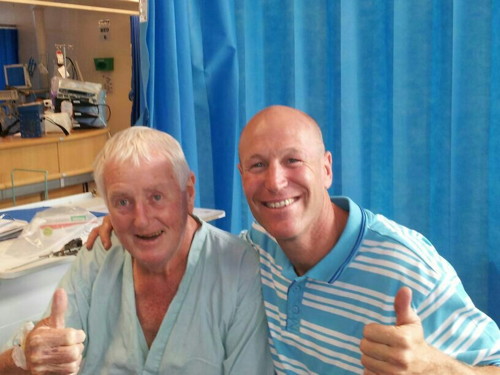 Watch manager Clinton Walsh from Millwall fire station and firefighter Steve Nolan from Old Kent Road sprung into action and performed CPR on 70-year-old John Lawrence, who suffered a heart attack after the game against Leicester.

"Myself and Steve were stewards at the match on Saturday," said
Clinton.

"After the game, we were standing by the players' tunnel, when we received a message to go to the male toilets, as a person had collapsed – that's all the initial information we were given.

"On arrival, we saw an elderly man lying face up and unresponsive. That's when our training came into force and I began to check his pulse, listen for breaths and listen to his chest for signs of life. Steve was continuously trying to get a response, it was obvious that the person had no pulse or visible signs of life. He then took a gasp for breath; so we then started to administer CPR."

The pair requested a defibrillator from the club's medical room and carried on with CPR until the doctor and paramedics arrived on the scene John started to respond and developed a stronger pulse and began breathing unaided. The club doctor congratulated both Clinton and Steve on doing a fantastic job.

Clinton added: "During this time, I kept reassuring John that he was in safe hands. Just before he was being taken away by the paramedics, he started gaining consciousness and became aware of his surroundings. As I had control of his head I continued to talk to him to ensure he stayed alert. Both Steve and I have since visited John in hospital, as he requested to see us to thank us for saving his life. His family were also extremely grateful to us."

After the match a representative of Charlton Athletic called the pair to let them know that John was doing well and mentioned that the club's chairman wanted to pass on his thanks.

Clinton said: "John is extremely lucky to have been found when he was, as everyone had left the ground after the match and the outcome could have taken a different turn. He is now recovering well after his ordeal."

All London firefighters are trained to use defibrillators which form part of the first aid gear carried by all of the capital's fire engines.