On Friday night more than 100 people raised £52,000 for the Robes Project winter shelters by taking part in a sponsored sleepout in the grounds of Southwark Cathedral. 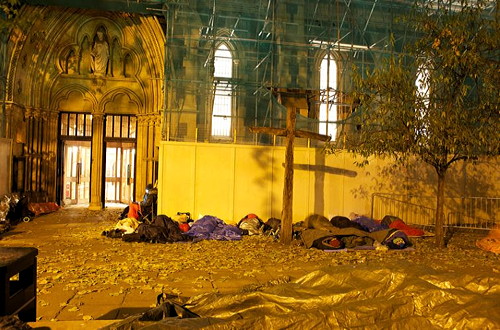 The sleepout is now in its third year and has become a key source of funding for the winter night shelters for homeless people run by the Robes Project since 2007.

Already the participants in the sleepout have raised a combined total of £52,000 and organisers hope to beat last year's £65,000 final result when post-event donations are added.

This year Cathedrals ward councillor David Noakes took part in the event for the first time.

"I have to say there is nothing like 'walking a mile in someone else's shoes' to increase your understanding of an issue," said Cllr Noakes.

"The sleepout gave me a small but real appreciation of the struggles of being homeless."

Other participants included the Dean of Southwark, Very Revd Andrew Nunn, who raised more than £3,000 in sponsorship, as well as Simon Hughes MP and All People's Party founder Prem Goyal.

A team from the church of St John's Waterloo led by parish priest Canon Giles Goddard raised more than £2,600.

Money raised at the sleepout keeps the the Robes Project's winter night shelters in church halls across Southwark and Lambeth up and running.

The ecumenical project accommodates dozens of rough sleepers from November to April each year, providing a hot meal, beds and somewhere to wash each night and a hot breakfast every morning.

"I am honoured to be part of this important charity that raises all its own funding and does an essential job of helping rough sleepers get off the streets in South London, said Rt Hon Simon Hughes MP, trustee of the Robes Project.

"The local community can be really proud that it has come together to raise this money and help the poorest people on the edges of society. The Robes Project really is a small charity doing a big job."

The Rt Revd Michael Ipgrave, Bishop of Woolwich, added: "We were thrilled to be entertained by two great musical acts this year: the Choir with No Name, who were simply stunning, and the Brass Quintet of the Band of the Life Guards, who wowed us with an hour of great music.

"Year on year, this annual sleepout gets better. I am thrilled that we have raised so much money that will provide shelter for so many people and help change lives."

Mandi Sturrock, retiring chair of the sleepout committee, "I'm delighted to be going out on a high. Having organised the first three years, I've seen this great fundraising event move up a notch each year. This year it looks as if we will have put Robes on a very stable footing for the year ahead."

• Carol-singers will be raising money for the Robes Project at London Bridge Station on Wednesday 11 December.

• To make a donation, visit www.justgiving.com/Robes