20 mph speed limit to be trialled on Blackfriars & London bridges

The speed limit on London Bridge and Blackfriars Bridge is to be reduced to 20 mph as part of an 18-month trial by the City of London Corporation and Transport for London. 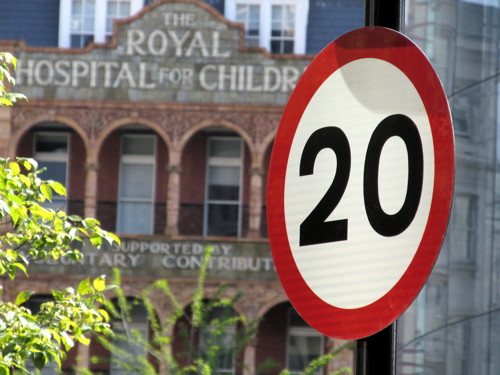 Following a vote by the City's Court of Common Council last autumn, consultation begins on this week on the implementation of the Square Mile's 20 mph speed limit.

At the same time, TfL will be introducing an experimental traffic order to set 20 mph speed limits on Blackfriars Bridge and London Bridge as well as the roads leading up to the bridges on the City side.

TfL's trial will last 18 months, during which time it will gather feedback and monitor the scheme's merits.

Residents and commuters will have the opportunity to comment on both schemes on the TfL and City of London websites.

Subject to feedback, the new speed limits will to be introduced during summer this year.

The Blackfriars 20 mph trial is linked to plans for a new north-south cycle route between King's Cross and Elephant & Castle.

In recent years cycle campaigners have staged several protests on the bridge calling for a reduction in the speed limit.

The move to introduce a 20 mph limit represents a policy change by the Mayor of London and TfL.

In 2011 Boris Johnson told the London Assembly that at Blackfriars Bridge "...a speed limit of 20 mph isn't necessary and could be a serious impediment to smooth traffic flow".

Steve Presland, the City of London's transportation & public realm director, said: "We have worked closely with our neighbouring boroughs and TfL to implement the 20 mph speed limit effectively, and hope that this stage of the process will lead to a much-needed reduction in injuries and casualties."

Leon Daniels, managing director of surface transport at TfL, said: "Through the Roads Task Force, the Mayor has made a major commitment to invest in London's road network, ensuring the capital remains a thriving international city that supports economic growth and provides safe and attractive spaces for all.

"We have long supported 20 mph speed limits on borough roads and more than 20 per cent – or more than one km in every five – of all roads in London are now 20 mph.

"While some roads in London provide vital arteries for keeping our city moving; others represent places in their own right and therefore lower speed limits could be more appropriate.

"Our trials in the City of London will help identify other parts of our network where speed limits could be changed in the future to better support the Mayor's aim to grow cycling, reduce casualties and to make life in London better while keeping London moving."

Green Party London Assembly member Darren Johnson AM said: "This should have happened years ago, but I'm glad that this obvious measure is being put in place to make these roads safer.

"The Mayor ignored TfL's own road safety team who issued a report over five years ago calling for a 20 mph limit on London's main bridges. I hope that the rest of London's busiest bridges will adopt 20 mph limits over the next few years."

Southwark Council will in the next two months introduce a 20 mph speed limit on streets in the Bankside area.

Last week Cllr Barrie Hargrove, Southwark's cabinet member for transport, said: "I have written to Transport for London to notify them that Southwark is about to become a 20 mph borough on the roads we control and inviting them to make the red route roads in our borough which they control, 20 mph also."