Local Christian and Muslim young people met at the Rockingham Community Centre on Friday as the Bishop of Woolwich's 46-mile walk around his episcopal area drew to a close. 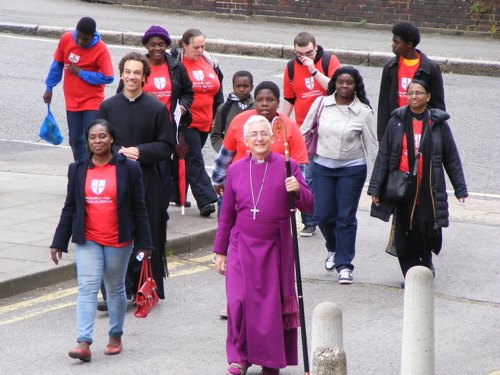 Bishop Michael leads the group to the Rockingham Community Centre 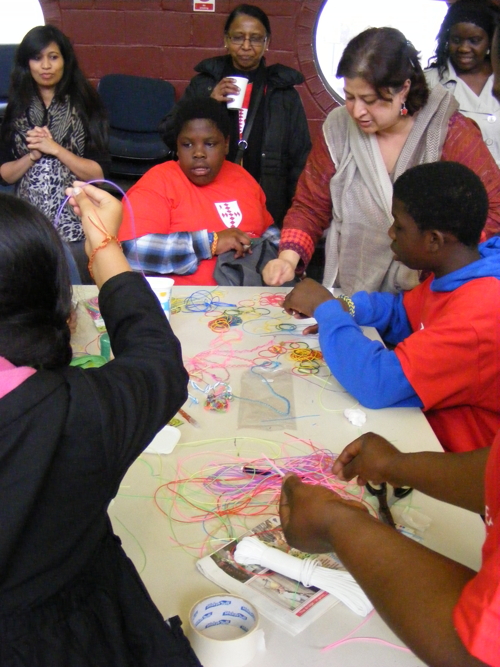 The 'beating the bounds' around the Southwark Diocese's Woolwich episcopal area was completed in four days with the help of around a hundred young people.

This year Rogation-tide, the traditional time for beating the bounds, coincided with summer half-term holiday.

Bishop of Woolwich the Rt Revd Michael Ipgrave led a group aged 11-25 years wearing red T-shirts up the Walworth Road on Friday afternoon having walked in both rain and bright sunshine.

The full 46 mile circular walk took the party round the edge of the boroughs of Southwark, Lewisham and Greenwich from Southwark Cathedral. The furthest point east, reached on the second day, was Bostall Woods where the group crossed the boundary by a few yards into Rochester Diocese to view the historic Lesnes Abbey ruins.

The last stop was in the St Matthew's-at-the-Elephant parish where the party was welcomed by parish priest Neil McKinnon and entertained by young local Christians and Muslims.

Welcome footprints had been laid outside the Rockingham Community Centre and inside friendship bracelets were presented to the visitors. The Next Generation group provided drinks and warm homemade biscuits.

At Southwark Cathedral the walkers were given seats in the choir for evening prayer. The walk had started there with morning prayer early on Tuesday.

During the week others joined the walk as the main party passed through parishes with numbers reaching over fifty in the middle of one day.

The final stretch within Southwark was boosted by Herne Hill's church youth group. Several commented that The Shard had been an ever looming presence on the horizon and a handy indication of their progress back to The Borough and the cathedral.

The Anglican Diocese of Southwark is divided into three episcopal areas, each with an area bishop. Bishop Michael said that he was delighted by the support and welcome received during the Woolwich area boundary walk.