A cyclist has been injured in a collision with a skip lorry at Elephant & Castle roundabout. 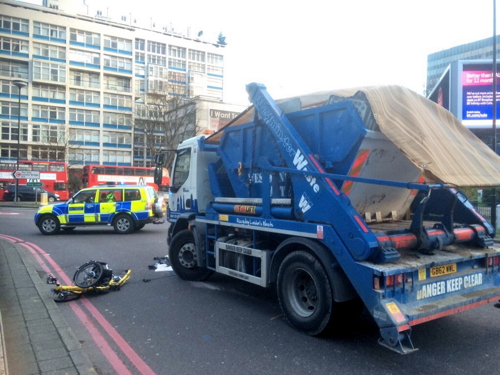 The collision took place on Friday afternoon on the northern side of the roundabout, close to the Bakerloo line ticket hall of Elephant & Castle Underground Station.

Eyewitness Annie McCullagh tweeted: "Just witnessed someone being crushed by a lorry on the Elephant & Castle roundabout. Most horrific thing I've ever seen."

The cyclist's injuries are described as non-life-threatening.

The skip lorry was operated by South Bermondsey-based Westminster Waste.

After the collision London Road was closed to traffic with buses diverted via Borough Road.

Friday's incident occurred at the same location where cyclist Meryem Ozekman was killed in 2009.