One Tower Bridge garden: council to ‘take another look’ at access

Southwark Council says it will hold talks with Berkeley Homes and the City of London Corporation to review the decision to prevent social housing tenants from visiting the communal garden in the One Tower Bridge development. 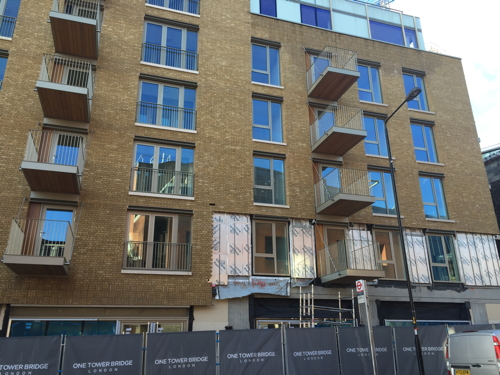 Earlier this week Southwark's planning committee voted unanimously to vary the legal agreement associated with the Berkeley Homes One Tower Bridge development which gave private residents and council tenants the right to use the same communal areas.

The effect of one of the changes to the agreement was to prevent tenants of the City of London Corporation living at Horace Jones House from using the 'appealing private courtyard garden' that was to be shared with the residents of the multi million pound private riverside homes at One Tower Bridge.

On Sunday morning – after the story first broken on this website had been followed up by the Guardian and the Independent – Southwark Council issued a statement promising to review the arrangements for access to the garden.

"The City of London flats that will be available at One Tower Bridge are among the best in the city," said a Southwark Council spokeswoman.

"The affordable homes there need to be genuinely affordable for the people living in them.

"The decision made at planning committee was to maintain this, so that while the residents in the affordable part of the development will be living in a high quality development and have their own first class garden area with views of central London, communal spaces and amenities, they won't be paying the additional service charges for the whole of the site, which could make living there significantly more expensive and possibly price people out.

"However, Southwark Council is happy to take another look at the decision and we will be speaking with both the City of London and Berkeley Homes about this matter."

Cllr Mark Williams, cabinet member for planning, regeneration and transport, said: "In Southwark we are committed to genuinely affordable housing which is why we are building 11,000 new council homes, and we have delivered more affordable homes in the past three years than any other London borough."

Cllr Adele Morris – a Lib Dem councillor who took part in Tuesday's meeting which made the decision – has warned that the council's offer to review the matter will fuel fears that the quasi-judicial planning committee is not sufficiently independent of the borough's Labour administration.

"The decision was taken by the planning committee, under the advice of officers, and is legally binding," wrote Cllr Morris on her blog.

"The council does not have the authority to change the decision.

"The planning committee was presented with the proposals by the officer and the applicant, and we were assured (upon questioning from myself) that the granting of the original planning permission had not depended on this access, and that residents would still have the use of more than the required outdoor space per flat – including their own private roof garden.

"In planning terms, we therefore had no reason to refuse the request.

"This reaction to the press story is shameful, and the comment now calls into question the validity of the decisions of the planning committee.

"Which, incidentally, has a Labour chair and a Labour majority. So where does that leave the council's credibility on planning?

"Does the council’s comment confirm the long held belief of local residents that the planning committee are just puppets in the hands of the Labour administration?"

Last year the City of London Corporation was forced to cut the proposed rents for tenants at Horace Jones House after Southwark blocked an attempt to charge more expensive 'affordable rents' instead of normal council rent.

Is the council right to review the decision?