A development of 43 social rented homes right next to Tower Bridge received its official opening last week when the first tenants received their keys from the City of London Corporation. 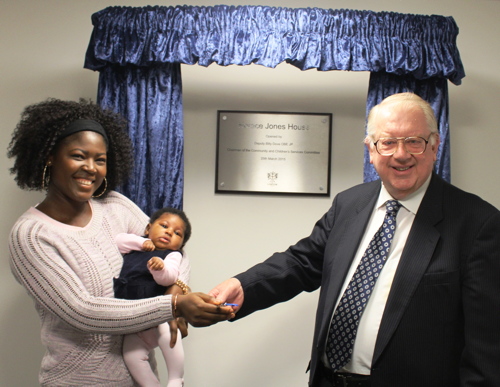 Horace Jones House has been built as part of Berkeley Homes' One Tower Bridge development.

Although it lies within the borough of Southwark, the building is owned and managed by the City of London Corporation, the local authority for the Square Mile.

Tenants for the 43 homes – valued on average at Ł1 million each – will be nominated by the City of London Corporation and Southwark Council.

"The City of London Corporation has provided Horace Jones House on land it owned previously which was being used as a car park.

"Building social homes in this location helps contribute to the vibrant mix of London's housing stock which has always benefitted the city.

"We are working hard to ensure the City continues to support the capital and its communities, by doing what we can to provide safe, secure and high quality housing.

"Horace Jones House demonstrates this commitment, and we hope our tenants enjoy their new homes."

Monica Badejo, a new tenant of Horace Jones House, said: "With the arrival of my baby girl, who is now 11 weeks old, my previous studio flat was too small.

"The new flat has the space my family needs to grow into. I'm from East London originally, and it's great that I have the opportunity to stay near my extended family and close to my job."

Tenant Daniel Williams, aged 34, added: "I've been on a social housing waiting list for around five years, so I'm very pleased to be selected to live in Horace Jones House.

"I've lived in central London all my life, but it's become so difficult to find affordable housing, and my salary certainly wouldn't stretch to a Ł40,000 deposit needed to buy a property.

"Horace Jones House ticks every box for me and my family; we have space, the rent is affordable and it's in a fantastic location."

Last month Horace Jones House made headlines after a story first revealed on this website was reported in several national newspapers.

We reported that Southwark councillors had agreed to an application by Berkeley Homes to prevent tenants of Horace Jones House using the communal podium garden available to other residents of One Tower Bridge.

Under the legal agreement linked to the original planning permission for the scheme, all residents were to have equal access to this garden area.

Although the City of London Corporation originally vowed to fight this decision to exclude its tenants, Guildhall officials have now backed down.

"Having now had the opportunity to consult with a number of prospective tenants of Horace Jones House, it is clear that there is little support from them to have access to the podium garden and meet the maintenance cost associated with this.

"We will continue to work with all our tenants to ensure they receive the best possible living environment, support and value for money."

Last week communities secretary Eric Pickles told the Evening Standard that he has a "strong preference for mixed development".