A sexual health clinic in Southwark is offering free syringes to be used with the illegal drugs GBL and GHB in an effort to prevent life-threatening overdoses. 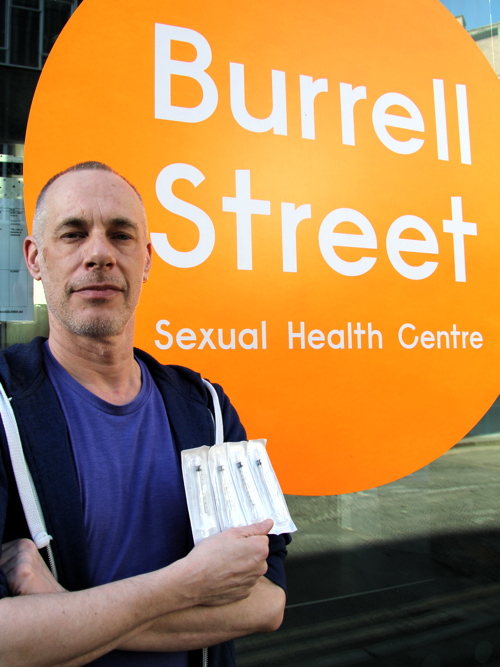 Burrell Street Sexual Health Centre, which is part of Guy's and St Thomas' NHS Foundation Trust, is providing 1ml syringes so that GBL and GHB users can properly measure every dose they take.

Gamma-butyrolactone acid (also known as 'GBL') is closely related to gamma-hydroxybutyrate ('GHB'). Both are sometimes called 'G' or 'liquid ecstasy' and their use is increasingly common among men who have sex with men when clubbing or attending sex parties.

GBL and GHB are typically sold as liquids in small bottles or capsules and the strength varies significantly. Users generally take between 0.5 and 2.0ml, which can be difficult to accurately measure out, and this increases the risk of inadvertent overdose.

"If people choose to use these drugs, despite the significant risks, then they will find 1ml syringes can help measure the doses taken accurately.

"We also hope that by offering syringes for collection from our clinic at Burrell Street, we will encourage users to speak to our qualified counsellors, psychotherapists, and health advisors at the same time."

GBL and GHB cause feelings of euphoria and reduce inhibitions but when taken in excess these drugs can cause severe neurological depression, including a reduced level of consciousness and coma.

"The risks of the sedative effects are increased when the drugs are taken at the same time as alcohol or other sedatives.

Dr David Wood, consultant physician and clinical toxicologist, added: "We regularly see individuals in A&E with the unwanted effects of taking GBL or GHB. Between October 2013 and September 2014 we saw nearly 300 GHB/GBL overdose-related presentations in our emergency department.

"The offer of syringes for measuring doses will help users to stay safe. We have also worked closely with local clubs, the police, and London Ambulance Service to develop guidelines and education for staff on how to assess and manage GHB or GBL overdoses and when to call an ambulance.

"It's crucial that if anyone is concerned that someone they are with may have overdosed, that they call an ambulance to bring them to A&E for urgent medical attention."