Plans for 48 flats and a 140-room hotel in a 24-storey tower on Newington Causeway have been approved by Southwark's planning committee. 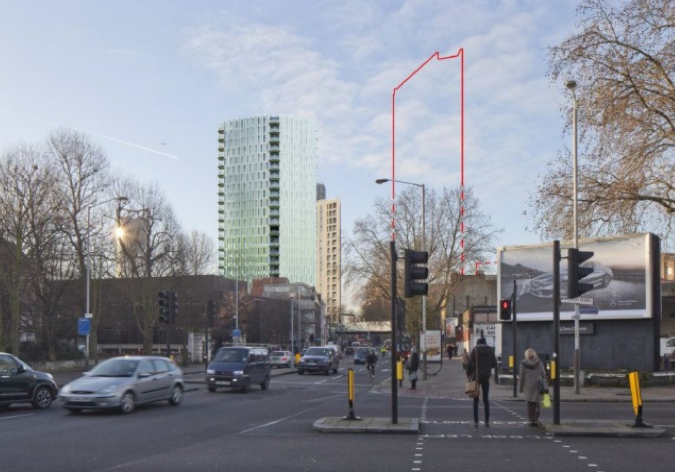 The newly approved scheme at 87 Newington Causeway is on the left; the outline in red shows the Two Fifty One tower currently under construction

Neobrand first presented its proposals to redevelop the narrow site between Southwark Playhouse and the railway viaduct back in 2014.

The firm's latest scheme for the site won the unanimous backing of Southwark Council's planning committee on Tuesday night.

The triangular site – formerly Northwood's garage – has a narrow frontage on Newington Causeway and a much larger frontage on Tiverton Street.

The scheme has been designed by SPPARC Architecture – the firm responsible for The Music Box in Union Street and the as-yet-unbill Quill tower near London Bridge.

Planning officer Daniel Davies said the scheme would provide "much needed hotel beds" in a central location as well as contributing to housing construction targets.

He said that the scheme's design was of "exceptional quality" and the building "would appear as a mid-height tower in the local context".

Of the 48 homes in the tower, 32 will be for private sale and 16 will be classed as affordable housing.

The 16 units of affordable housing will be split between social rent and intermediate housing (eg shared ownership).

Southwark's design and conservation manager Michael Tsoukaris said that the proposed tower's height had been set so that it would not be visible from the Trinity Church Square conservation area.

The committee heard from David Warman, a solicitor representing the Blyford Investments Company which owns the adjacent site including the Southwark Playhouse building and fears that this scheme will prejudice its own redevelopment plans.

Mr Davies assured councillors that officers did not believe that the scheme at 87 Newington Causeway would unreasonably fetter the redevelopment of the site next door.

• Neobrand also developed The Signal Building on the other side of the railway bridge on Newington Causeway.