On the day that Southwark councillors will decide on two crucial planning applications for tall buildings at Elephant & Castle, the Ministry of Sound club has revealed its own counter-proposals for a development on Newington Causeway. 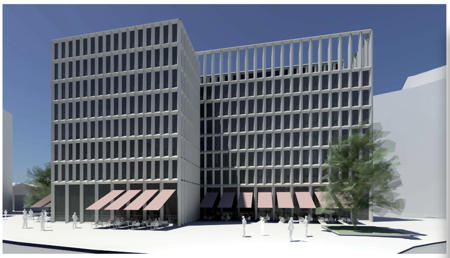 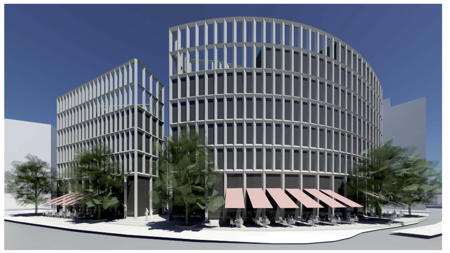 Option 2 is for a new low-rise building

Ministry of Sound claims that if Oakmayne's 41-storey residential development on the Eileen House site goes ahead, the club will be at risk of closure if its new neighbours complain about the noise from the nightclub and its customers.

The club has engaged Marks Barfield, the architects responsible for the London Eye, to draw up alternative proposals for the Eileen House site.

The audacious counter-proposal is the latest salvo in an extraordinary PR battle between Ministry of Sound and Oakmayne.

"In the current economic climate it is inconceivable that the developer’s plans in front of Southwark councillors tonight will ever be built," says Lohan Presencer, Ministry of Sound Group’s chief executive.

"They are in the view of Ministry of Sound unfinanceable and unrealistic. Often planning applications like these are submitted so that the applicant can 'flip' the site, i.e. sell it on bolstered by the added value of the approved planning permission.

"Today we want to bring this process back to reality – a reality driven by a better Southwark with badly needed leisure capacity and business space.

"We have identified two outstanding options for the Eileen House site. We recognise that in opposing this scheme it’s important to put forward positive proposals for an alternative vision, especially as Oakmayne are not prepared to do this, notwithstanding our scepticism as to their ability to obtain finance.

"We have therefore gone ahead with Marks Barfield to produce viable alternatives which are more practical economically and more sympathetic to the local Southwark environment.

"We are prepared to enter into negotiations with the site owners which could well include our participation in the development, or even our acquiring the site.

"Option one is to update and regenerate the existing building. It will include extensive office and business provision, a swimming pool and gym for local people, and a host of restaurants.

"Option two is to build a low-rise mixed-used development also consisting of extensive office and business provision, a swimming pool and gym for local people, and a host of restaurants.

"Either one will meet the council’s own policies, fit in with the Elephant & Castle area, offer significant social benefits and both safeguard and create hundreds of jobs."

It is unclear how Ministry of Sound's proposed public swimming pool would square with Southwark Council's plans to rebuild the nearby Elephant & Castle Leisure Centre to include a new pool.

Last week Oakmayne chairman Christopher Allen insisted that his proposed development could co-exist with the nightclub and that the Mr Presencer's concerns were unfounded.

Ministry of Sound has been engaged in an extraordinary two-year public battle with Oakmayne, using every possible tactic to delay the planning process and whip up public support for the club.

Counter-intuitively, the club has been at pains to stress that it is a poor neighbour and that people wouldn't enjoy living in close proximity to the venue.

On Tuesday night Southwark Council's planning committee will finally consider Oakmayne's planning application for the Eileen House site and will consider for a second time Neobrand's scheme for a 22-storey block across the road.