#LondonUnited: how city plans to mark 1st anniversary of attacks

Mayor of London Sadiq Khan has announced plans for the commemoration of the first anniversaries of last year's terrorist attacks on the capital, including the Westminster Bridge and London Bridge tragedies. 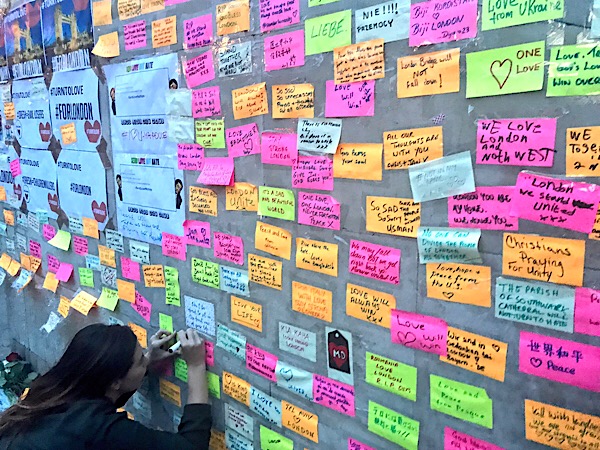 The impromptu 'peace wall' at London Bridge in June 2017

After consultation with 14 bereaved families, survivors, the emergency services and local councils, the Mayor of London has released details of plans to provide a focal point for Londoners at City Hall and bring the city together in an act of solidarity through #LondonUnited.

The phrase will also be projected on to the Houses of Parliament, London Bridge, Finsbury Park Mosque and Parsons Green Tube station on the anniversaries of the attacks.

The space will open on the anniversary of the first attack in Westminster on 22 March and remain open to the public until the anniversary of the Finsbury Park attack on 19 June. Later in the year "London United" exhibitions will be organised to highlight London's resilience and hope, shine a light on London's heroes and the bravery of our emergency services, and demonstrate how Londoners unite together at times of adversity.

The plans have been agreed following consultation with the families who have lost loved ones, survivors, the Met police and emergency services, and the local authorities in the areas affected.

"Londoners will never forget the horrific terror attacks on our city in 2017," said Mayor of London Sadiq Khan.

"We will never forget the bravery of our emergency services and first responders who ran towards danger while urging the rest of us to run to safety.

"And we will never forget the courage of PC Keith Palmer who paid the ultimate sacrifice whilst protecting Parliament.

"These were not only attacks on our city and our country, but on the very heart of our democracy and the values we cherish most – freedom, justice and tolerance.

"We know that families, friends and communities have their own private arrangements in place to mark this tragic anniversary, and our plans here at City Hall are intended to complement, without intruding on, individual private commemorations.

"I hope these arrangements will help people to come together and remember those who were killed and injured, to show solidarity and support for their families and friends and the people whose lives have been affected by these tragic attacks.

"As we enter this period of remembrance and reflection, we stand together as Londoners, united against terrorism and in hope for the future."

Cllr Peter John, Leader of Southwark Council, said: "The attacks in London Bridge and Borough on 3 June last year left a lasting impact on the people of Southwark, and we will be remembering all those who lost their lives and were harmed by the attacks on that date locally.

"But the horrific events of last spring and summer were not an attack on London Bridge or Westminster or any other one place, but an attack on our great city, and the London way of life.

"We stood united then in the face of terror, and it is right that we do so again, both to remember everyone who was harmed last year, and to also look forward with confidence as one city, strong and united."

The #LondonUnited projection on the Houses of Parliament will begin at 0001 on Thursday 22 March and will be visible until dawn and then again from dusk until midnight.

The 3D #LondonUnited installation will be on the map area at City Hall. It will be open to the public from 8.30am-6pm Monday to Friday, except Bank Holidays, from Thursday 22 March until Tuesday 19 June.