Potters Fields: residents call on Livingstone to "wake up" 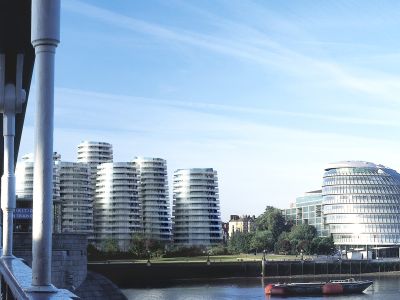 At the beginning of November UNESCO and the International Council on Monuments and Sites sent an inspection team to London to investigate the impact of new developments on the setting of the Tower of London. The inspectors visited the Potters Fields site which sits across the river from the Tower and met a Southwark Council planning officer who briefed them on the proposed development.

Local residents have accused the Mayor of complacency in his response to the concerns expressed by UNESCO: "Ken is in cloud cuckoo land if he thinks that the World Heritage Site is not threatened by inappropriate development," says Alan Chapman, vice-chair of the Shad Thames Residents' Association. "Right across from Tower Hill and in the shadow of Tower Bridge we face the prospect of an overbearing and insensitive development by Berkeley Homes on the Potters Fields site.

"Not only is the development completely inappropriate for the area but we now, thanks to the government, face the even worse prospect of Berkeley Homes building only part of the development on the small part of the site it owns. Bad as the design is in totality, part-finished it will be a scar on the landscape."

Earlier this week Alan Chapman launched a petition calling on the Prime Minister to intervene to prevent the building of up to eight towers on the Potters Fields site on the south side of Tower Bridge. It has already attracted 200 signatures including Green Party London Assembly member Jenny Jones and Grange ward councillor Bob Skelly.

Gareth Mogan, who chairs the Knot House Residents' Association, added: "Ken is part of the problem. His housing targets drive over-development and his blindness to the problems with this particular development is stopping him from speaking out against it. Ken needs to wake up to the real danger and speak out on behalf of all Londoners before it's too late."

Meanwhile Riverside ward councillor and Southwark council leader Nick Stanton has restated his ambition for Potters Fields to be a key site in the London 2012 Olympics cultural programme: "If the world had any sense Potters Fields would be to arts and culture in 2012 what the East End is to sport," he told the London SE1 website.

Responding to the concerns about the World Heritage Site, Cllr Stanton added: "There is clearly some threat. UNESCO don't tend to do this sort of thing on a whim."

The Mayor insists that he has acted to protect important views: "The London Views Management Framework will for the first time offer protection at a metropolitan level to the view of the Tower from across the River. This is one of the main vantage points for the public to see the Tower without paying."

Nick Stanton argues that there is a contradiction between the Mayor's advocacy of high rise buildings and concern for protecting views: "As usual Ken is trying to have his cake and eat it".

Separately the Southwark Council leader has condemned the GLA bill published by the Government this week which would give the Mayor of London greater control over planning decisions as "a smash and grab raid on the powers of local councils".

"The best people to decide about local issues are local councillors who are in touch with the communities that will be affected," said Cllr Stanton.

He added: "If Ken Livingstone got his way then we would be more likely to see ugly and unwanted high rise blocks, such as those proposed for Potters Fields, spread across Southwark."