Redevelopment plans for the All Hallows site in Copperfield Street have been rejected at a meeting where the chair was required to stand aside. 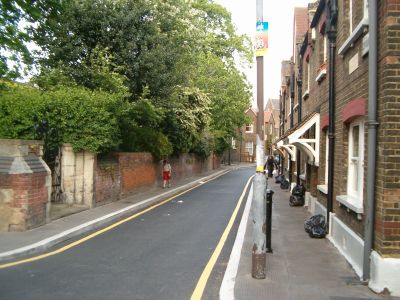 View of Copperfield Street with All Hallows Gardens on the left 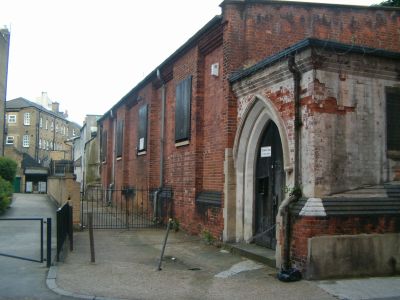 Borough & Bankside Community Council, sitting at Charles Dickens Primary School as the planning authority, turned down the latest scheme for All Hallows in Copperfield Street.

An earlier application was turned down by planning officers in September 2005.

A room packed with around 40 residents from the next door flats heard their spokesperson Nigel Kershaw claim a lack of consultation as well as concern over loss of light and damage to the conservation area.

Before the matter was discussed the new Community Council Chair Cllr Adele Morris was required on legal advice to vacate the chair and leave the room as she was deemed under the Local Government Act to have an interest .

Acting chair Cllr Lorraine Zuleta relectantly accepted further advice from the legal officer that Cllr Morris could not speak on behalf of her constituents due to having previously opposed the plan.

Following protest from the floor Cllr Zuleta insisted that the matter be referred to the Borough Solicitor to avoid confusion at future meetings. She also stressed that Adele Morris neither lived on the adjoining estate nor derived an income from it.

A spokesman for Southwark Cathedral declined to comment on the decision of the Community Council.

After Cllr Morris had resumed the chair she exercised her casting vote to reject an application for an additional floor on the new Riverside Workshops building in Park Street. Concern had been expressed about views from Borough Market being affected.

An application by Wright Brothers oyster bar in Stoney Street for extended opening hours to 1am was rejected in favour of an extension to midnight valid for only three years.