All Hallows: locals and church plan future over coffee and cake

After years of tension, Southwark Cathedral and local residents are now holding constructive conversations about the future of the former All Hallows Church site in Copperfield Street. 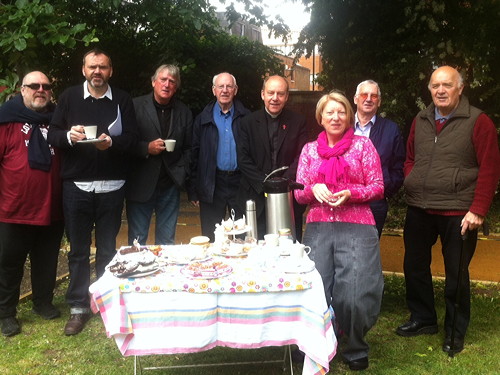 The Dean of Southwark, the Very Revd Andrew Nunn, visited All Hallows on Saturday for a coffee morning with the local residents who tend the community garden which occupies part of the site of the bombed-out church.

Some local residents feared that planned redevelopment of part of the site – which is now owned by Southwark Cathedral – would destroy the tranquility of the garden and new flats would overlook neighbouring homes.

A 'Save All Hallows' campaign was launched and eventually the cathedral withdrew its planning application.

Now the garden volunteers are working closely with the cathedral to explore future uses for the remaining part of All Hallows church, the adjacent hall and vicarage.