Pioneering youth charity SE1 United held a celebration of its first year as an independent organisation at the Living Space in Waterloo on Monday. 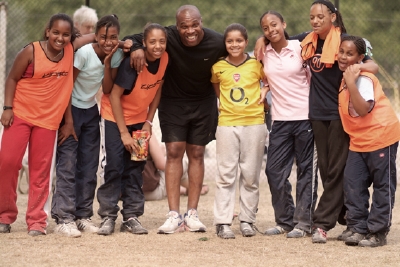 Since becoming an independent charity a year ago, SE1 United has gone from strength to strength.

A new youth committee has been recruited and three previous members have become trustee. The Earl of Normanton has become the group's first patron.

Highlights from the SE1 United events calendar include the biggest Sports Day ever in August and the Youth Oscars ceremony in October, plus ongoing activities throughout the year including homework clubs, girls club, boys club, leadership programme, visits to Amsterdam, Alton Towers and the Earl of Normanton's estate.

"It was a natural progression after my great experience as a youth committee member to become a trustee," explains 18-year-old Jack Goldfinch.

"I can carry on working in the community and start my career in travel and tourism. SE1 United has helped me learn so much and I want to help other young people to achieve their ambitions."

"We are outward looking and are always keen to partner on projects so that young people get a say in what happens locally, and they get the chance to show what they can achieve," says Natalie Bell, director of projects.

SE1 United's youth programme is steered and put together by the 17-strong youth committee which meets at least once a month. At present SE1 United employs two members of paid staff, ten local session staff and more than 30 regular volunteers.

SE1 United has a trained board of trustees – half of the members are under 21 – and hosts and works in partnership with the Waterloo Youth Steering Group ( 30 members from local organisations).

SE1 United reaches more than 1,000 young people a year – more than 70 per cent of them from BME backgrounds – in Southwark and Lambeth.

All young people living in Waterloo aged 10 to 21 years are automatic members invited to come to large scale events and access free youth support and advice.