A 19th-century drawing of Winchester Palace's window has been enlarged as a tile decoration in Clink Street. 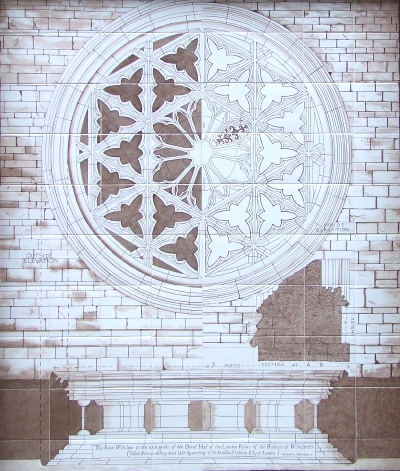 The reproduction can be found on the wall of Horseshoe Wharf where the management company had long wished to fill a blank space.

Horseshoe Wharf is opposite the remains of the Winchester Palace great hall where the 14th-century rose window survives.

The print, discovered in the Guildhall Library by Horseshoe Wharf resident Cecilia Palmer, is an etching dated 1884 which depicts the inside and outside elevations. The image was hand-painted on the tiles by Jonathan Weights.

Winchester Palace was home of the Bishops of Winchester and the window has been seen by Cardinal Beaufort, Henry VIII, Katharine of Aragon and Mary I.