A blue plaque to recognise the work of Victorian social reformer Octavia Hill has been unveiled at Red Cross Garden in Redcross Way. 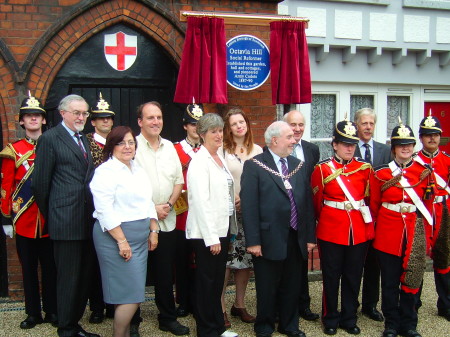 The plaque has been made as part of Southwark Council's annual Blue Plaques scheme which allows members of the public to nominate people and places they think deserve recognition.

Red Cross Garden, which was officially reopened in June 2006, was established by Octavia Hill as a centre of recreation and education in deprived industrial Southwark.

In 1899 the adjacent Red Cross Hall was the venue for the inaugural meeting of Southwark Army Cadets, attended by Field Marshal Lord Wolseley.

Sunday's ceremony was attended by Surrey Army Cadets who gave a drill display and formed a guard of honour.

The plaque was unveiled by the Mayor of Southwark Cllr Bob Skelly and Gillian Darley, biographer of Octavia Hill.

• The plaque was removed following the ceremony as it has not yet received planning permission.

• Nominations for the 2007 round of Southwark blue plaques are open until 31 August; send your suggestions to Southwark Local History Library or email [email protected] . A shortlist will then be compiled and opened for public voting.