Eight months after the much-vaunted wind turbines were temporarily removed from the roof of Palestra in Blackfriars Road, confusion surrounds the reasons for the removal of the devices. 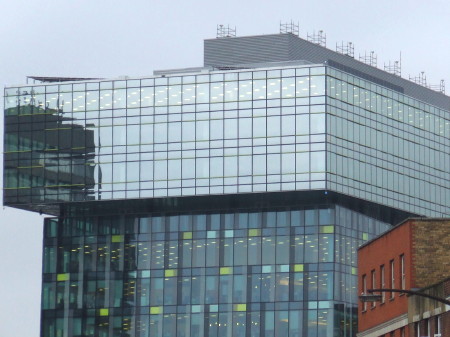 The turbine-less roof of Palestra

Palestra, the award-winning landmark office block designed by Will Alsop, is home to the London Development Agency and the London Climate Change Agency who had the 14 micro turbines installed as a flagship project.

But at the end of January the turbines were suddenly removed from the roof of the building.

At the time the London Development Agency told us that the turbines had been recalled by the manufacturer and would be reinstated about a month later.

Eight months since they were removed there is still no sign of the turbines.

In May the London SE1 website was contacted by Edinburgh-based Renewable Devices. They insisted that our report of a "recall" was incorrect:

"Renewable Devices manufacture the Swift turbine and we have issued no such recall," Dr David Anderson told us in May. "It is true that some of the turbines installed in the UK have been decommissioned recently by Scottish & Southern Energy and their sub contractors prior to carrying out some upgrade work to the turbines and re-installation.

"The Palestra building is one such case and, once the component upgrades have been carried out, the turbines will be re-installed in the next few weeks."

Once again that timetable for reinstallation was not met.

We asked the London Development Agency to comment on the current situation.

"The Palestra Swift Turbines were taken down in January 2007 following a manufacturer recall by Renewable Devices," said an LDA spokesman, once again at odds with what what Renewable Devices had told us.

The London Climate Change Agency (LCCA) has requested the installer, Solar Technologies, to either re-install the Swift turbines or replace them with alternative wind turbines. LCCA is working with Solar Technology on the reinstatement of wind turbines as soon as possible

"The LCCA is committed to continue supporting building integrated wind generation, which is part of the solution for a low carbon London.

"We have been advised by Solar Technology, LCCA installer, that Renewable Devices, the manufacturer, have not yet been able to provide evidence they have resolved the technical problems of the Swift Turbines."

We contacted Renewable Devices for a further comment on the LDA's latest statement but they have not returned our phone calls or emails.

A year ago the Mayor of London Ken Livingstone said that the Palestra wind turbine scheme "demonstrates my commitment for the Greater London Authority organisations to lead the way in taking measures to tackle climate change through reducing carbon emissions".