Mayor of London Boris Johnson will bring the Olympic flag to City Hall on Tuesday where it will be flown until the 2012 games. 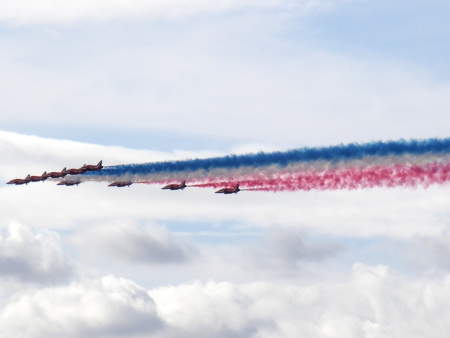 The Red Arrows seen from London Bridge on Sunday afternoon

The Mayor of London received the Olympic flag at the closing ceremony of the Beijing games.

Boris Johnson was handed the flag by IOC president Jacques Rogge in front of a capacity crowd of 91,000 people at the national stadium in Beijing and an estimated television audience of well over a billion viewers.

The Mayor waved the flag four times before handing it to an usher.

He will bring the flag back to London on Tuesday and fly it outside City Hall alongside the Paralympic flag when those Games have concluded in September.

The Red Arrows flew over central London on Sunday afternoon to mark the culmination of the handover celebrations.

The London Eye has turned its lights red, white and blue this weekend to launch the nation's countdown to the 2012 games.

A sequence of festive colours will be repeated throughout the bank holiday weekend, with special effects showing the colours not only changing but also moving in different directions.

On the hour, every hour the wheel sparkles gold in recognition of the success of the British Olympic team in Beijing.

“As one of the UK's most iconic 21st century landmarks, we are delighted that the London Eye can be part of the celebrations and offer visitors an opportunity to join in with the festivities,” says managing director David Sharpe.