Boxing star Sir Henry Cooper has unveiled a blue plaque to mark the location of the gym where he used to train above the Thomas a Becket pub in the Old Kent Road. 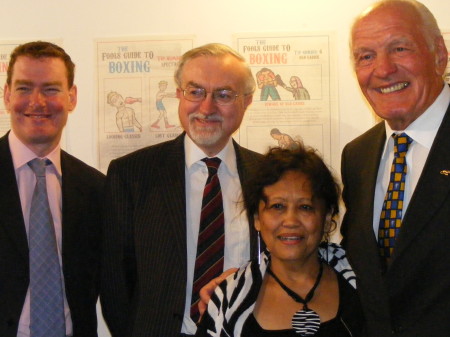 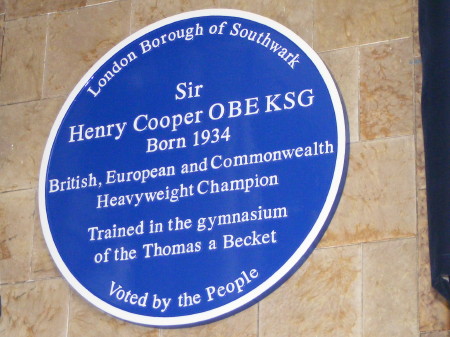 He added: "Mum and Dad would be so proud. It's a pleasure to be here today."

His biographer Robert Edwards reminded the guests that Sir Henry was a Olympian having taken part in the Helsinki Olympics.

The plaque was installed as a result of the 2007 round of voting in Southwark's unique blue plaque scheme.

"It's marvellous that Southwark Council, with the help of its residents, can honour the boxing legend Sir Henry Cooper," says Cllr Lewis Robinson, executive member for culture, leisure and sport.

"This blue plaque is the first to go up as part of Southwark Council's scheme to get the people to choose, and we're delighted that they've chosen such an iconic figure."

The Thomas a Becket pub, recently used as an estate agent's office, is now a gallery space run by Nolia Devlin.

During the reception Stephen Humphrey of the Southwark Local History Library told guests at the former pub that Thomas Becket had been met in the road outside by London clergy on his last visit to the capital in 1170 just two weeks before his murder.

The historian also said that the location featured in Chaucer's Canterbury Tales as 'St Thomas's watering-place'. This was where Sir Knight, landlord of the Tabard in Borough High Street, began to tell the first story on the journey to Canterbury.

More than 3,000 votes were cast by members of the public based on the 2007 blue plaque shortlist.

This autumn a plaque will be unveiled in Webber Street to mark the birthplace of Picture Post photographer Bert Hardy.