Fr Ray Andrews announced another fund-raising project for the homeless on the day he presented a cheque for his recent sponsored abseil down Guy's Tower. 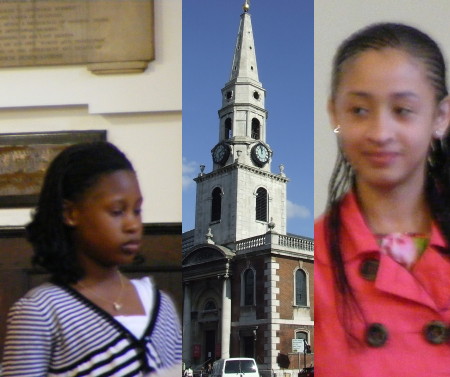 The priest-in-charge of St George the Martyr told his congrgation of his decision to climb Mount Kilimanjaro, Africa's highest mountain, as part of a sponsored Lent project next year.

Earlier he had welcomed Marion Marples, a representative of the Southwark churches' homelessness project Robes, to Sunday morning service to receive the cheque for the proceeds from his sponsored abseil in July and preach.

"The Robes project is very hands on," Marion Marples told the congregation. "It makes a difference.

"We started three years ago with seven churches and ran for two winter months. Next year we shall have 14 churches and run for 5 months – in effect 10 weeks for each church.

"The great strength of the project is that this group of churches reaches from Peckham to Kennington, Elephant to Blackfriars Bridge and is ecumenical – with Baptists, Methodists and Anglicans."

Marion Marples said that the project started when the Archbishop of Canterbury pointed out that there was no winter emergency shelter south of the Thames until you get to Croydon.

"This was the challenge. Everyone who lives in central London is very aware of the people who live on the streets in the midst of one of the wealthiest cities in the world.

"Everyone feels guilty when they pass a person with a 'homeless and hungry' notice because we are advised not to give money directly as it so often goes to fund a drink or drugs habit."

Afterwards the speaker was questioned by St George's Sunday school members who are taking homelessness as a theme this autumn.