A think tank report on the potential to increase passenger boat services on the River Thames has called for a new pier to be built on the South Bank between the current Festival and Bankside piers. 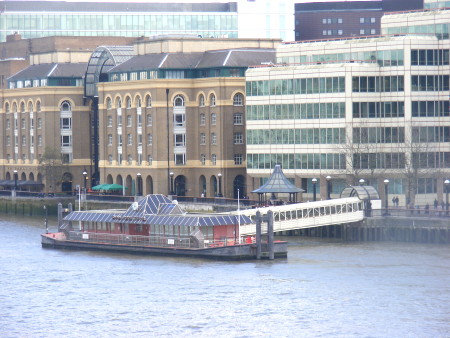 The report, entitled At a Rate of Knots and published by the centre-right Policy Exchange think tank, argues that a small investment in piers by Transport for London could unlock the potential of the river.

"The river could be carrying up to 12 million people a year, for an investment of only £15- £30 million, far cheaper than any other transport project per person," argues Robert McIlveen, editor of the report and Policy Exchange research fellow. "Creating a new Thames line on the Tube map, with a frequent service from Putney to the Thames Gateway, would relieve some of the worst pinch-points on the tube network.â€

The report notes that "developers and occupiers of South Bank would like to see a second South Bank pier between Festival and Bankside". A location near Oxo Tower Wharf seems most likely.

In its outline of what should happen in the next decade, the report says: "By 2020 it is to be hoped that London's central piers would be operating efficiently, with any capacity shortfalls addressed and new piers in place at Somerset House and South Bank."

The report also calls for London Bridge City Pier to be brought into TfL ownership and rebuilt: "The design and layout of the pier – it looks a bit like a floating Chinese restaurant – is not at all suited to meeting this potential, and the berthing space and passenger facilities are in urgent need of improvement."

Waterloo Millennium Pier at the base of the London Eye will need to be expanded by 2012 to keep up with demand, say the report's authors.

Meanwhile the report argues that there is "enormous potential" to increase the use of Bankside Pier due to its proximity to Tate Modern and Shakespeare's Globe – though strangely the pier is omitted from the report's proposed diagram of river services in 2012. Commuter rush-hour boat services to Bankside were axed two years ago due to "low demand".

Since last November passengers have been able to use Oyster pay as you go on the Thames Clippers services on the river, but as river travel doesn't count towards the daily price cap it is still an expensive way to travel.