Housing minister John Healey has visited the Tabard Gardens Estate as a hotly contested election campaign gets under way in Chaucer ward. 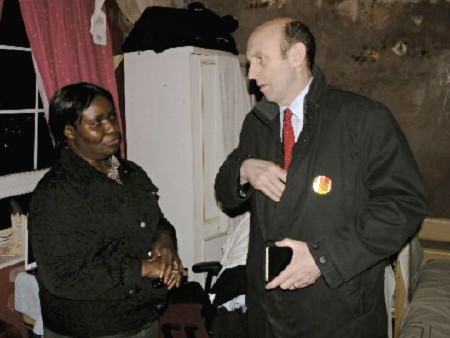 John Healey MP, minister for housing, last week met voters on the Tabard Gardens Estate as he lent his support to the Labour campaign in one of the most marginal wards in the borough.

At the last borough elections in 2006 just eight votes separated Labour from the victorious Lib Dems in Chaucer ward and both parties have been campaigning hard in the area in recent months.

"Labour has invested more in housing in this country than any government for generations – including giving hundreds of millions of pounds directly to Southwark Council to make homes decent again," said John Healey.

"But from listening to the stories of residents on the Tabard Gardens Estate and seeing for myself the problems they're having with their homes, some of the money appears to have been squandered."

"I set out this week new plans for how the Government will give councils more freedom to invest in their housing stock, including building more homes. But unless Southwark changes its priorities and starts getting the basics right on housing policy, local tenants will continue to suffer from the council's failure."

North Southwark and Bermondsey Lib Dem MP Simon Hughes has been a long-standing critic of the Labour Government's failure to reform the rules governing borrowing by local authorities which make it near impossible for them to build new council houses.

Former Labour councillor in Chaucer ward Steve Lancashire is hoping to be reelected on 6 May along with fellow candidates Musadiq Dawudu and Claire Hickson.

They are taking on incumbent Lib Dem councillors Tim McNally and Mackie Sheik. Retiring councillor Lorraine Zuleta has been replaced as a candidate by Poddy Clark.

"Children are growing up in homes with water pouring through the walls and sewage coming up through the plugholes; it's just not acceptable.

"This council needs a change in direction so that every council home is warm, dry and safe and not just the lucky few."

• Visit the London SE1 website throughout the run-up to the elections on 6 May for coverage of all the parties' campaigns, candidates and manifestos.