Transport for London has given nine of the new Barclays Cycle Hire bicycles to Southwark and Lambeth so that local residents can take part in training before the scheme launches next month. 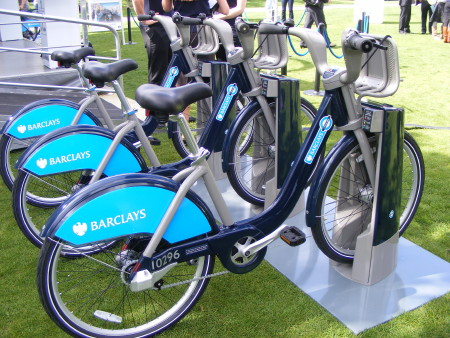 People who live, work or study in the Barclays Cycle Hire zone will be able to sign up for cycle training in advance of the scheme going live.

Southwark will get four bicycles out of the allocation to be used for cycle training and Lambeth will receive five.

The London boroughs will be able to keep the Barclays Cycle Hire bicycles until 31 March 2011.

Londoners can sign up for TfL-funded cycle training, available for free or at a subsidised cost from every London borough, by visiting www.tfl.gov.uk/cycling

Those wishing to complete their cycle training in one of the Cycle Hire boroughs on a Barclays Cycle Hire bicycle will be given the option to request this.

"We're pleased that this scheme will be hitting the streets very soon and, with around 36 docking stations in Southwark, it's great that our streets will be changing to encourage more cycling in London," says Cllr Barrie Hargrove, Southwark's new cabinet member for transport, environment and recycling.

"I'm optimistic that the Barclays London Cycle Hire will revolutionise the way people get around the centre of London."

Dawn Haines, Lambeth Council transport manager, said: "Cycling has huge benefits, cutting pollution and congestion and of course helping people keep fit. Lambeth Council is helping to make cycling in the borough safer and practical through a range of schemes, and we fully support the London Cycle Hire Scheme which will help to make London a world class cycling city."

Barclays Cycle Hire will cover most of SE1 west of Tower Bridge Road.

• Find out more about Barclays Cycle Hire at the roadshows to be held on the South Bank on 31 July and at City Hall on 2 August.