The docking station outside the Blue Fin Building in Southwark Street was the most popular in the capital on the first day of the Barclays Cycle Hire scheme, according to figures released by Transport for London. 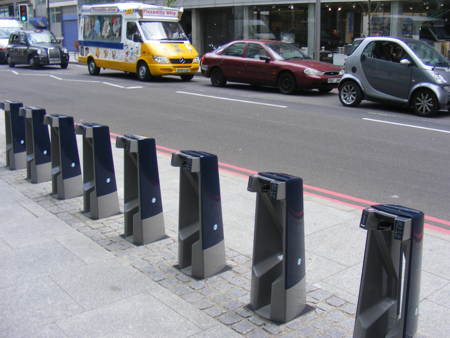 89 journeys were made from the Bankside Mix docking station on Friday, with Soho and the City also proving popular.

The Bankside Mix docking station was the first to be installed and has been in place since mid-June.

On Saturday the Hop Exchange docking station at the eastern end of Southwark Street – close to Borough Market and London Bridge Staion – was the second most popular docking station in London with 71 cycles hired.

"Just three days into our cycle hire scheme we're seeing Londoners embracing the freedom of pedal power and are signing up in their droves," says Mayor of London Boris Johnson.

"Our 21,000 pioneering members have already made more than 14,000 journeys since we launched on Friday.

"With every new day, these gleaming machines are transforming our streets and are putting us well on our way to becoming the best big cycling city in the world."

Currently 5,000 bicycles are in circulation between 315 docking stations.

Once the system is fully established the fleet of cycles will grow to 6,000 and a further 85 docking stations will be added to the network.

In the next few weeks non-members will be able to hire bikes by paying with a credit card using the touch-screen terminals provided at every docking station.

TfL is urging cycle hire users to ensure they dock their bikes correctly at the end of each journey. When people re-dock hire cycles, they need to ensure that the light on the docking point turns green and the cycle clicks into place. Members who don't dock their cycles properly risk being charged for longer than their actual journey.

Some users have experienced other glitches: the editor of this website has been unable to use the system since returning a bike to a faulty docking station at Bricklayers Arms on Friday evening.

Although the green light was shown and the bike securely locked, the journey was not marked as completed by the computer system.

Despite reporting the problem to the helpline immediately, his cycle hire account has been suspended and a Ł150 charge for late return is shown on his account.

What's your experience of Barclays Cycle Hire so far?