Work has begun on the installation of a 'super' cycle hire docking station with space for 124 bikes close to the main entrance of Waterloo Station. 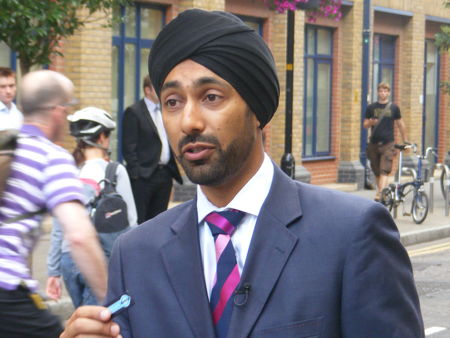 The new station will be the biggest in London and will help to meet the high demand from rail commuters arriving at Waterloo who want to use the cycle hire scheme to continue their journeys.

When the cycle hire scheme launched in July Transport for London decided not to cater for rail passengers arriving in London, but commuters have proved to be some of the scheme's most enthusiastic users.

The docking station will be installed on the Cab Road ramp near Victory Arch and will ease the pressure on the two docking stations at Concert Hall Approach which many commuters already use.

"Demand for bikes in the Waterloo area has been particularly high and the new 'super' docking station there is the first of a series that we are putting in to help our ever increasing membership get around town," says Kulveer Ranger, the Mayor of London's transport advisor.

The docking station at Waterloo should be operational by mid-December.

It will be the largest of more than 50 additional docking stations that are being installed for Barclays Cycle Hire users by the spring. Several SE1 docking stations will also be extended to help meet demand.

"It is great news for the thousands of passengers who use Waterloo every day that they will soon be able to hire bikes and drop them off at the station," says Mike Goggin from Network Rail.

"Together with the recently upgraded bike parking facilities at the station, the arrival of the increasingly popular Barclays Cycle Hire will make it easier and more convenient than ever before for passengers to make their onward journeys by bike.

"We support the Mayor's ambition to make London a cycling city and we will continue working with TfL to explore options for installing docking stations at other mainline stations to meet the increasing demand."

Meanwhile Lambeth Council is inviting suggestions from local residents as to where further docking points could be installed.