Baroness Ludford MEP has visited Alfred Salter Playground to see for herself the impact that Thames Water's plans to use the garden as a work site for its 'super sewer' will have on local residents. 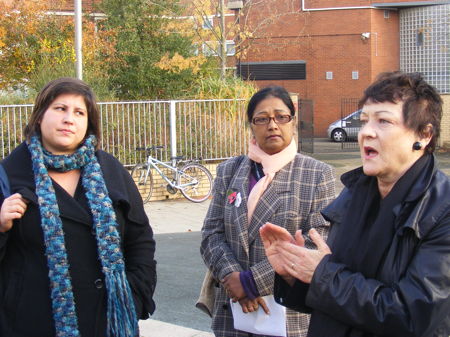 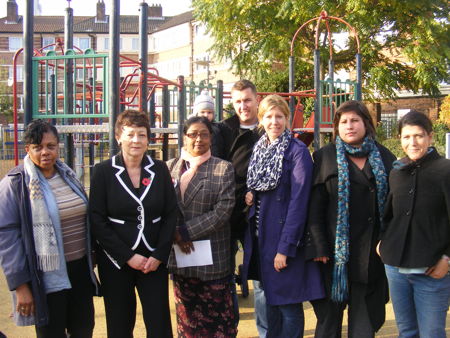 Baroness Ludford MEP with councillors and members of Riverside Parents

Liberal Democrat peer Sarah Ludford, who is one of the eight members of the European Parliament representing the London region, has campaigned for several years to ensure that the UK authorities comply with European rules about the discharge of raw sewage into rivers.

She has consistently highlighted the environmental and health problems caused by untreated sewage in the River Thames.

6.5 million cubic metres of diluted sewage was pumped into the Thames in August 2010 alone. Thames Water's proposed 20-mile 'super sewer' under the river will capture it before discharge and divert it to treatment works.

When Thames Water published its plans in September it revealed that it had selected King's Stairs Gardens in Rotherhithe and the Alfred Salter Playground in Druid Street as work sites for the new tunnel.

The water company will take over the Druid Street site for at least two years and the riverside garden for seven years.

On Monday the MEP met local councillors and residents in the two Southwark open spaces to see why Southwark residents and politicians have been asking Thames Water to think again.

"I can obviously appreciate the objections that local residents have," Baroness Ludford told the London SE1 website.

"I see myself as an intermediary to help local residents get heard by Thames Water and help push Thames Water because I want the Thames cleaned up but I don't want it done in a way which puts everybody's noses out of joint – especially if they blame Europe!

"This is all being done for an environmental reason: if it ends up reducing people's amenity and impacting on local communities and environment it's not such a great deal."

She added: "The objective must be to spread the disruption in such a way that minimises the total hassle for residents."

"I'm absolutely delighted that the community is coming together on this," she says.

"Everyone is very much in agreement that we need to clean up the Thames but clearly using green spaces and play areas is not acceptable and I'm glad that the community are saying that loud and clear."

Campaigners have asked Thames Water to consider using brownfield sites near the river for their worksites such as Chambers Wharf or Convoys Wharf.

Objections to the use of the Alfred Salter Playground have been tabled by Training for Life Downside and the Downside Fisher Youth Club. Riverside Parents, which holds soft play sessions at the Training for Life building, is also concerned about the loss of outdoor play space.