Poet and playwright John Constable, author of the epic Southwark Mysteries play staged at Southwark Cathedral earlier this year, has been made an honorary fellow of London South Bank University. 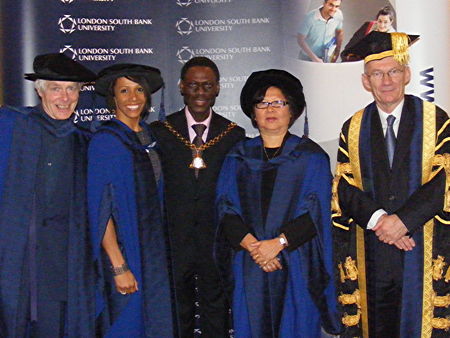 John Constable told the London SE1 website that he felt "humbled" by the award and hoped that it would serve to raise the profile of the campaign he is leading to protect the site of a historic paupers' graveyard in Redcross Way.

"I've accepted the honour partly on behalf of all the people who have supported me in the work I do both with the Southwark Mysteries and in particular the work campaigning for the garden of remembrance at the Cross Bones Graveyard," he said.

Constable's cycle of mystery plays was performed to sell-out audiences at the cathedral in April this year.

"We are delighted to present this year's honorary awards to these exceptional individuals who have shown through their work and contributions to fields such as sport, science, technology, theatre, and public service an extraordinary commitment to the values and work of our University," says vice chancellor Professor Martin Earwicker.

James Smith, chairman of Waterloo-based Shell UK, received an honorary doctorate of science and gave a short address on behalf of all the graduands.

In his address he spoke about the unique qualities of this part of London: "I work on the South Bank of the Thames. London is a game of two halves: the north bank and the south bank are inextricably linked but as John demonstrated in his works and plays the history of the South Bank is different, its development is different and its challenges and opportunities are different as well."

He added: "In the 30 years I've worked for Shell it has been wonderful to see the development of the South Bank, beside the river and at Elephant & Castle and Borough as well, and I'd like to think that the company I work for has been part of that."