Passengers on Thames Clippers boats from Docklands to Central London will be forced to change boats at Bankside Pier at high tide because the company's large vessels can't fit underneath Blackfriars Railway Bridge. 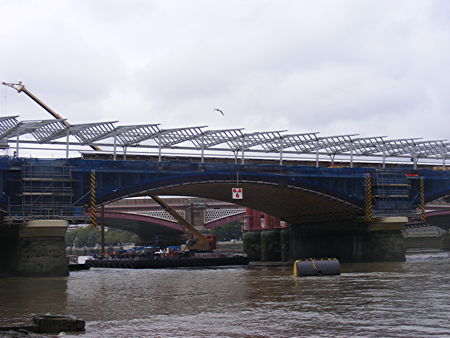 A notice posted on the Thames Clippers website says: "Due to ongoing work for the construction of the new Blackfriars Station the middle arch at Blackfriars rail bridge is now closed until April.

"Unfortunately the two remaining navigable arches are not high enough to allow our larger vessels to pass through at high tides.

"Although this will not affect our timetable it does mean that during these limited times our main service will terminate at Bankside Pier and a shuttle service will operate to the remaining upstream piers, ie Blackfriars, Embankment and Waterloo."

Blackfriars Station is closed from 20 November to 16 January while work on the new cross-river platforms and roof continues.

Meanwhile the Mayor of London has ruled out extra subsidy for Thames Clippers to enable them to reinstate the late-night services withdrawn earlier this month.

"The Mayor claims that the Thames should be a vital part of an integrated transport strategy yet he is not even willing to meet commuters from Southwark, Greenwich and Tower Hamlets who are up in arms over the reduced service they are now facing," said Ms Pidgeon.

"The Mayor really should be listening to the people who have suddenly discovered that their last boat home leaves as early as 9.10pm.

"Some commuters are even thinking of not renewing their season tickets following the changes to the winter timetable.

"By refusing to meet commuters and engage with this issue the Mayor is simply washing his hands over the cuts to a much-needed commuter service."