Security guards employed to patrol the South Bank have been granted a range of police powers under the Community Safety Accreditation Scheme. 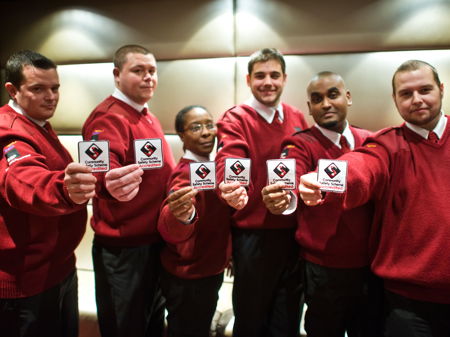 Members of the South Bank Patrol, which covers the section of riverside between Lambeth Bridge and Blackfriars Bridge and inland to Waterloo Station, will have five new powers to tackle antisocial behaviour.

The Community Safety Accreditation Scheme (CSAS) is a Home Office initiative which enables police services to delegate a limited range of powers to third parties.

Southwark Council's community wardens already have similar powers, but on the South Bank the patrol staff are not employed by a public authority but work for the the Shield Guarding Company under the management of the South Bank Employers' Group.

Patrol staff with the new powers wear a Home Office-approved national accreditation badge and carry an identification card which gives details of their powers.

The accredited patrol members received their badges and certificates on Wednesday from Superintendent Andy Howe of Lambeth Police during a ceremony at the Park Plaza Westminster Bridge hotel.

"The powers give us the facility to deal with low-level crime – that's things like street drinking in a controlled drinking zone – the guys get the power to request the surrender of alcohol," explains David Clark, security coordinator for the South Bank Employers' Group.

"They can can ask someone who is street drinking and acting anti-socially to hand over the alcohol. If they fail to do so that becomes an offence and the police can get involved.

"Secondly they've got the power to take details for certain offences or antisocial behaviour; that means they can take someone's name and address for acting antisocially and that report can be forwarded on to the local authority or the police.

"If someone fails to give their name and address, that becomes an offence and the police can get involved."

The South Bank Patrol will provide a monthly report to Scotland Yard on the use of their police powers and will have regular contact with a police liaison officer.

The question of private management and enforcement activity in public space is a hot topic at the moment, with the London Assembly's planning and housing committee currently conducting an investigation on the subject.

David Clark insists that South Bank Patrol has no aspirations to be an "ersatz police force".

"Rest assured that South Bank Patrol has been operating in the area for the past two years and we don't see these powers changing how they operate in any great way," he says.

"We don't expect our patrol service to be marching around accosting people and preventing people from doing things; they are here to stop the undesirable element.

"We're not going to turn it into a situation where these guys are issuing fixed penalty notices, which would be of great concern for the area. It's not what we're about. We're still an ambassadorial-type service."

South Bank Patrol has ten staff and the service operates 12 hours a day, seven days a week. Although the service covers both sides of the Lambeth/Southwark border, at present the new powers only apply within the borough of Lambeth.

"I have a South Bank team that consists of a sergeant and four police constables who work very closely with the CSAS representatives," says Superintendent Andy Howe.

"So the intelligence flow between the two will be critical to a successful intervention."

Superintendent Howe told the London SE1 website that he believes that forums such as the South Bank Employers' Group and South Bank Business Watch will provide appropriate checks and balances on the use of the new powers.

The South Bank Patrol was established using section 106 funds linked to the planning permission for the London Eye as well as contributions from other local businesses and Lambeth Council.