Should steel from New York’s twin towers be installed in Potters Fields Park?

The 9/11 London Project Foundation has applied for planning permission to install a sculpture next to City Hall made from steel from the World Trader Center but the Potters Fields Park Management Trust doesn't support the proposal. 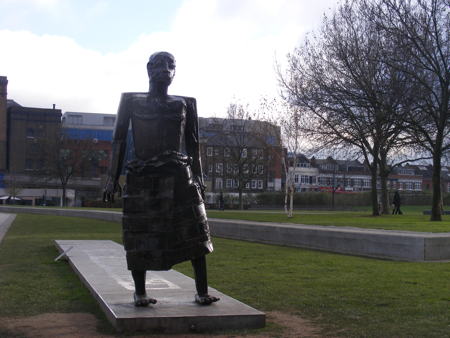 The 9/11 installation would occupy the same site as Sokari Douglas Camp's bronze figure commemorating victims of slavery. The Southwark-based artist's sculpture is due to leave Potters Fields Park after a year and is destined for installation in Burgess Park

The foundation has commissioned Japanese-Russian artist Miya Ando to create the 8.5-metre sculpture using steel columns from the World Trade Center donated by the Port Authority of New York and New Jersey.

She says that the illuminated upright steel columns, which will be surrounded by a pool of water, will "serve as a visual symbol of peace and tolerance".

Southwark Council's planning committee is due to consider the proposal next week. It is intended that the sculpture should be completed in time for the 10th anniversary of the terrorist attacks in New York on 11 September 2001.

The sculpture has been proposed for the corner of Potters Fields Park immediately adjacent to City Hall. The same site is temporarily occupied by Sokari Douglas Camp's bronze slavery memorial which was installed in August.

The riverside green space is held on a lease from Southwark Council by the Potters Fields Park Management Trust who have formally objected to the planning application.

Trust chairman Cllr Nick Stanton recently wrote to Peter Rosengard to say that "the board felt that the scope and size of the installation was inappropriate given the size of the park" and that "only a smaller and radically redesigned installation" was likely to be acceptable.

Other objectors to the proposal include the Shad Thames Residents' Association who say that the "overpowering and 'violent' installation" would completely overwhelm the park.

We approached the 9/11 London Project Foundation's planning consultants for a comment on their proposals but no response had been received by the time of publication.