The Royal Oak in Tabard Street has been honoured with two awards and inclusion in a new book on important pubs. 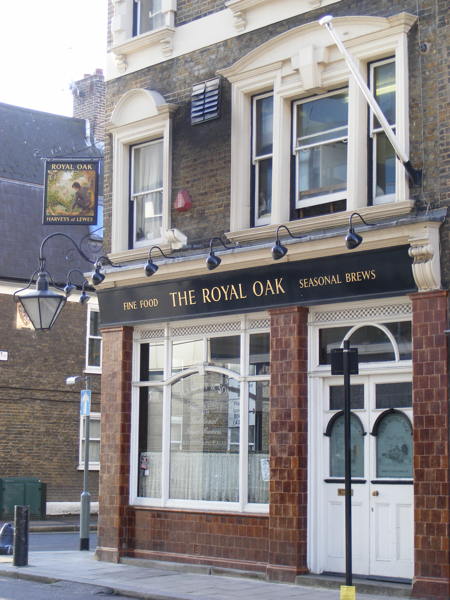 The Fancyapint.com Best London Pub Awards 2011 has given the coveted Hall of Fame Trophy to the Royal Oak. It has also been included among the top five in the reviewers' list.

The Hall of Fame citation says that The Royal Oak has "consistently provided high levels of service over a long period".

The only other SE1 pub included in the London Pub Awards 2011 is The Draft House in Tower Bridge Road which is declared to be the capital's 'Most Improved Pub'.

The Society for the Preservation of Beers from the Wood has just made The Royal Oak its London Pub of the Year 2011.

Roger Jacobson editor of of SPBW's magazine Pint In Hand said: "This is the third time that the Royal Oak has won, this being a tribute to the excellence of the pub's beers and food, the general 'atmosphere' of the place – helped by there being no distracting TV, music or electronic games – and the friendly and efficient service."

SPBW, which predates CAMRA (Campaign for Real Ale), claims to be the original beer consumer organisation. Its 2011 award will be presented to the Royal Oak in January.

In CAMRA's Great British Pubs, a book for the beer and pub lover highlighting 200 good pubs, the Royal Oak heads the city pubs category. But it is praised as a community focus.

"A trip to the Royal Oak in Borough, Harveys' sole London pub, is more than popping out for a quick one – this is one life-affirming home from home," says the author Adrian Tierney-Jones.

"Harveys only started trading here in August 1997, when they bought a rundown pub that no one expected they could salvage – but they did. Unsurprisingly, this is a pub where locals gather."

Two other SE1 pubs are featured in CAMRA's book. The Rake in Borough Market is described as "the first pub to specialise in craft beer" and "a trailblazer". The George in Borough High Street is described as a "living slice of pub history" and "an essential stop on any crawl around London".