The Society for the Preservation of Beers from the Wood has formally presented the Royal Oak in Borough with its Greater London Pub of the Year 2012 certificate. 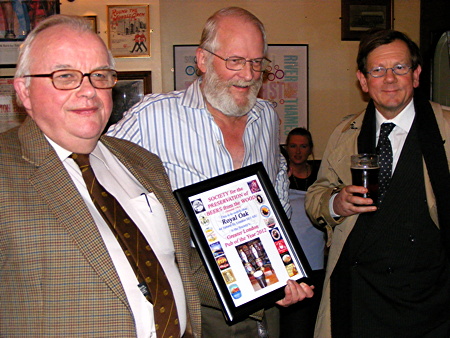 This is the third time that the famous Tabard Street pub has triumphed in the competition. The Royal Oak is only London pub belonging to Harvey's of Lewes, the oldest brewery in Sussex.

Miles Jenner, Harvey's head brewer and joint managing director, was present at the Royal Oak on Monday evening to make the presentation to landlord Frank Taylor.

Miles Jenner is the fifth generation brewer descended from the Jenners of nearby Crosby Row. Jenner's London Stout was supplied to the capital's theatres and music halls.

"It was Dr Johnson who said 'I drink the ale of Southwark' and he could not have found a better hostelry in which to do so," reflected Miles Jenner.

He added that the area had a history of brewing but the present Royal Oak staff had catapulted it to stardom.

The society's national chairman Mike Hall said: "I think this is one of the best pubs in London – or indeed the country.

"It has maintained the standards of a proper pub. There is no 'muzak' here. There's good people running the place. There's always good food and good company."

Roger Jacobson, editor of the society's journal Pint In Hand, added: "The Royal Oak is renowned for the quality of its ale and none of our party had any complaints whatever."

The shortlist included the Calthorpe Arms and Ye Olde Mitre in Holborn and The Sultan in Wimbledon. Final voting took place at the historic Dog & Bell in Deptford.

Lewes's association with Southwark can be traced back to the 12th century when the Prior of Lewes maintained a house in Tooley Street which operated as an inn. It survived the Reformation to become the Walnut Tree. The site at the bottom of Duke Street Hill is now covered by London Bridge Station.