Southwark Council has accidentally revealed details of its top-secret agreement with developer Lend Lease for the regeneration of the Heygate Estate at Elephant & Castle. 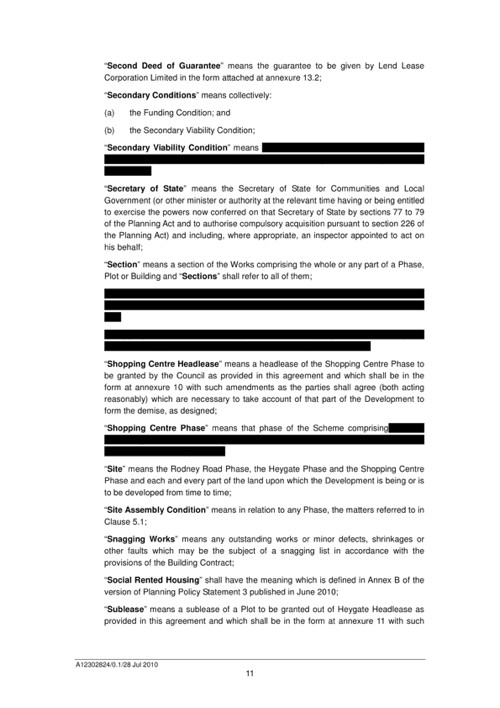 The blanked-out sections could be read by selecting, copying and pasting blocks of text

On Tuesday a public inquiry opens into the compulsory purchase order proceedings launched by the council to remove the last remaining leaseholders from the Heygate Estate.

A redacted version of the July 2010 regeneration agreement – which sets out the schedule of payments from Australian developer Lend Lease to the council for the transfer of the Heygate Estate land – was published on the council's website as one of the core documents for the public inquiry.

However, campaigners preparing to give evidence at the inquiry have discovered that they can read the blacked-out sections of the document simply by copying and pasting the text into a word processing program.

The document – which has now been republished on a blog which carries commentary critical of the Elephant regeneration process – appears to show that the council's expected capital receipts from the Heygate land are almost equal to the costs incurred in emptying and demolishing the buildings.

The council has previously gone to considerable lengths to protect the confidentiality of the regeneration agreement, including the formal censure of the leader of the opposition for mentioning some of the financial details in an open council meeting.

During the seven-hour hearing into that minor technical breach – the figure she spoke about was already in the public domain – it was alleged that the disclosure of the financial details of the deal could result in Lend Lease terminating the agreement.

A Southwark Council spokeswoman said on Monday: "We are urgently looking in to what has happened."

In a joint statement the Southwark Liberal Democrat council group and Simon Hughes MP said: "The Lib Dems in Southwark have long been calling for full publication of the Labour council's deal with Lend Lease, which has now been made public because of a council blunder.

"The Southwark Council document just published makes it clearer than ever that Labour did not get a good deal for local residents or council taxpayers.

"It raises big questions about the low price Lend Lease bought the land for, and why the developers of Southwark's biggest development are being allowed to make their profits at the expense of desperately needed local housing at social or affordable rents.

"We will now be interrogating Southwark's Labour bosses and the details of their agreement with Lend Lease. We will insist that the Labour council now answers the uncomfortable questions which they have ducked so far.

"The regeneration of the Elephant and Castle must not mean local people pushed aside for developers' profits."

In response, council leader Peter John said: "I am incredibly proud of the progress we have made on the regeneration of the Heygate Estate and the Elephant & Castle.

"This project has never just been about profit for the council – it is about bringing 2,500 new homes; 6,500 new jobs; a new leisure centre, a new shopping centre, new transport infrastructure and public realm to the area – and pulling the centre of London over the river.

"But I am confident that the agreement we have reached with Lend Lease does represent good value for the people of Southwark.

"By their reaction the Lib Dems have once again shown that they do not believe in regeneration. They dithered and delayed for 8 years and would happily see the Heygate to stand empty for another decade. They are the opponents of change."