Southwark Council has launched a month-long public consultation on plans for new landscaping at St Mary's Churchyard at Elephant & Castle. 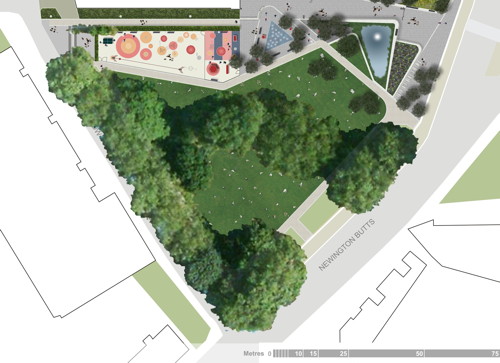 It's only five years since Ł1.35 million was spent on the relandscaping of the churchyard. Now, with a new leisure centre and the luxury flats at One the Elephant under construction next door, the council has announced plans for further changes to the park.

The proposals include two extended and improved play areas for under-fives and over-five year olds, an interactive water play area and a pond. New trees and park furniture also feature in the plans.

"Local people keep telling me that they want to see progress made at Elephant & Castle, and in the last few weeks the changes have been obvious for all to see," said Cllr Fiona Colley, cabinet member for regeneration.

"Since Easter we have taken several big steps towards the transformation of Elephant & Castle into a place where people want to live, work and visit. Work has begun on the brand new leisure centre and swimming pool, and now we have some exciting plans for the park that people can comment on.

"I hope that local residents will take this opportunity to help shape St Mary's Park into a green space with plenty for everyone to enjoy."

Although the consultation materials refer to 'St Mary's Park' throughout, the council insists there is no plan to drop the word 'churchyard' from the name of the park which was once the burial ground of St Mary Newington and remains consecrated ground.

The new scheme, funded by contributions from Lend Lease and the council, proposes to keep some of the original play equipment, fencing and safety surfaces, as well as providing new play equipment to appeal to different age groups.

A consultation event will be held on Tuesday 21 May at the London College of Communication between 6pm and 8pm.