Dozens gather to ‘Reclaim Vauxhall’ one week on from homophobic attack

Around 150 people - led by the Mayor of Lambeth - took part in a walk along the Thames Path on Sunday evening to 'reclaim' the space a week on from a homophobic attack. 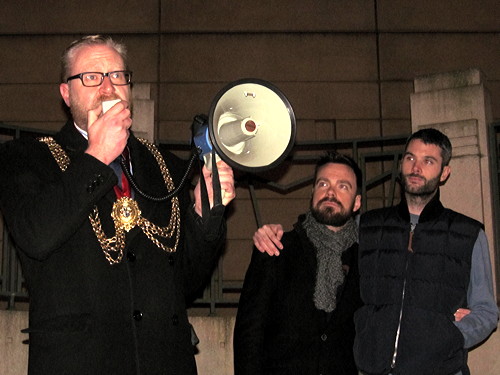 Cllr Mark Bennett, Mayor of Lambeth, addresses the crowd on the Thames Path outside the MI6 building

On Sunday 17 November trade union activist David Braniff-Herbert and his partner were walking north along the Thames Path from Vauxhall Bridge when they received "homophobic abuse and a threat of violence" from a group of four or five youths.

The couple took shelter in The Rose pub on Albert Embankment where, according to David Braniff-Herbert, "two of the boys came in, one holding some sort of weapon".

One week on, Braniff-Herbert organised a 'Reclaim Vauxhall' anti-hate crime walk along the same route from Vauxhall Bridge, past the MI6 building and across Albert Embankment Gardens to The Rose pub.

"I think it's very important that we mark what happened recently in a positive way and that's what we're doing this evening," said Cllr Mark Bennett, Mayor of Lambeth.

"We're reclaiming this part of Lambeth on behalf of the gay people – the LGBT people – of Lambeth."

He added: "The only thing that won't be tolerated in Lambeth is intolerance. There's no place for prejudice in Lambeth and no home for hate."

Among those who took part in Sunday's event were Cllr Jack Hopkins, Lambeth's cabinet member for safer and stronger communities, and Giles Semper, executive director of the Vauxhall One business improvement district.