The developers of the Shell Centre have submitted a planning application for a temporary sales office and visitor centre on part of the Hungerford Car Park next to Jubilee Gardens. 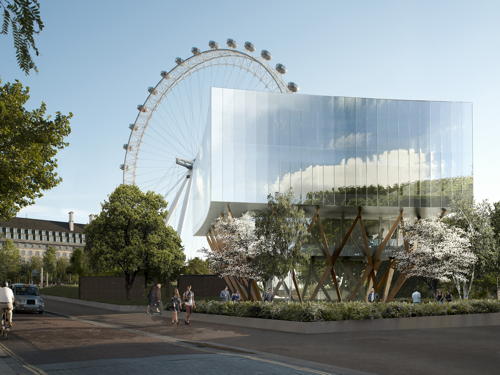 Although their main Shell Centre redevelopment is subject to a public inquiry, Canary Wharf Group and Qatari Diar have continued to work on associated schemes including the off-site affordable housing in Lollard Street SE11 and a temporary sales office.

For the sales pavilion, London Eye architect Marks Barfield won an international design competition and their proposal has now been submitted to Lambeth Council for planning permission.

The 20-metre glass and steel structure would have four storeys, with the side facing Jubilee Gardens carrying an LED screen for public art displays.

The double-height ground floor would be open to the public and provide information and interactive exhibits about the main scheme and the history of the South Bank.

The first floor would hold a meeting room and educational facilities, whilst the second and third floors are intended as showrooms for the flats in the Southbank Place development.

"We are hopeful that, following the public inquiry in December, the secretary of state will give the green light to our proposals to redevelop the Shell Centre site," said John Pagano, speaking on behalf of the joint venture developers Braeburn Estates.

"With this in mind, we are preparing other aspects of the redevelopment to ensure there is no delay if we do get the go ahead.

"We chose local architects Marks Barfield for this building as they have already made a significant contribution to the South Bank with their world-renowned design of the London Eye.

"The high-quality designs they have proposed for the visitor pavilion will be in keeping with our aspiration for the Shell Centre scheme, and complement the South Bank's cultural offer. We hope for approval of the pavilion in the coming months, recognising that this is fully dependent on securing approval for the main site.

"In the longer term, our proposed plans for the South Bank include the transformation of the Hungerford Car Park into a park which would result in the expansion of Jubilee Gardens by a third.

"This would herald a major enhancement to the public areas adjacent to the new Shell Centre site with landscaped recreational space available for everyone to enjoy."

Last May Braeburn Estates revealed it had agreed heads of terms with Southbank Centre for the sale of the Hungerford Car Park which, if the Shell Centre development goes ahead, will be turned into an extension of Jubilee Gardens.

At last year's public inquiry the sale price for the car park was revealed to be £11 million, with Southbank Centre planning to use the cash on its Festival Wing plans.

Braeburn Estates also confirmed that it would be prepared to consider proposals from the British Film Institute for the creation of a new film centre on part of the land.

The Marks Barfield proposal is controversial because it stands on designated Metropolitan Urban Land which is protected from development by planning policy.

When the proposal was shown to members of Waterloo Community Development Group last year, some White House residents objected that the structure would block their own views of Jubilee Gardens and the London Eye.